Album Review: Six Feet Under - Nightmares of the Decomposed
Reviewed by Gareth Pugh

I was surprised to find whilst researching for this review that 'Six Feet Under' are the fourth bestselling death metal band in the US, which is remarkable given some of the other acts out there. They started out as a side project of Chris Barnes, the original Cannibal Corpse vocalist, and he has been the only constant since then, with a revolving door policy for other members. What is notable this time around though is the recruitment of ex-Cannibal Corpse guitarist Jack Owen and marks the first collaboration between the two since Cannibal Corpse's 'The Bleeding' back in 1994! I always thought it was a bit strange when Jack Owen left Cannibal Corpse, only to join Deicide, it would be a bit like Dave Murray leaving Maiden to join Priest. Anyway, he seems to have almost come full circle, and re-joined his old band mate, and has written all the music for this latest release. 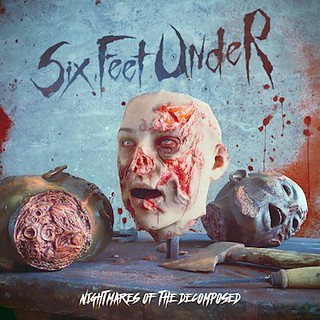 The band have always been prolific, and 'Nightmares of the Decomposed' is the 13th studio album, as well as four 'Graveyard Classics' cover albums, a few E.P.'s, a live album and a few compilations. They haven't always been the most consistent of bands, and the quality of some releases is questionable at best. Take last release 'Torment', a noteworthy low, and instead of building on the momentum of 'Undead', 'Unborn' and 'Crypt of the Devil', probably the strongest three album run that Six Feet Under have had, they returned to the meandering mediocrity of the likes of 'Bringer of Blood' and 'Death Rituals'.

So does 'Nightmares of the Decomposed' raise the quality? Well, yes and no. It's certainly better than 'Torment' and Owen definitely brings his A game when it comes to the riff writing. Opener 'Amputator' is a cracking up-tempo song, bristling with energy and speedy chops. 'Zodiac' and 'The Rotting' see the band experiment with tempos and arrangements, both built on the same solid riff work, and adding some wackiness. 'The Noose' is a particular favourite of mine, solid sheets of guitars and a chilling lyric. There's other good tracks in 'Death Will Follow', 'Migraine', 'Blood of the Zombie', and 'Labyrinth of Insanity', all solid death metal tracks, with that particular groove that the band are known for, with some outlandish riffs and ideas thrown in for good measure.

Production wise the band have never sounded so good either, they have a thick yet clear mix, with a very cool, super heavy guitar sound, and a solid and weighty rhythm section. The weakest part of this album is actually Barnes himself, lyrically he's on good form and thankfully there's no repeat of the likes of 'Bloody Underwear' (WTF?) from 'Torment', but vocally he's the weak link, frankly some of his vocal efforts are a bit embarrassing. Also unfortunately, and this is often the case with Six Feet Under, their own self-editing lets them down, there just isn't enough material here to warrant twelve tracks, and inevitably there's a fair amount of filler. However when it's good, it's very good, and if you're a fan of the band, there is enough here for you to warrant buying it, if you were never really into them, 'Nightmares of the Decomposed' isn't likely to change your mind.