I haven’t really reviewed much extreme metal in the way of continental Europe, so here we have Ataraxy with their latest studio album, set for a mid-June release, titled The Last Mirror. Formed in 2008 out of the Spanish region of Zaragoza, the band got a slow start to their career where their first Demo dropped in 2009 before their first EP, Curse Of The Requiem Mass, released a year later to great praise. Now a decade old, the band’s first album, Revelations Of The Ethereal, was met with critical acclaim and easily put the band on the map to be taken notice of. But it would be another six years before the band finally released another full length record, titled Where All Hope Fades. The band would release a Compilation that brought that Demo and EP together but nothing substantial, until 2022 where the band announced they’d release their third album, and the subject of this review: The Last Mirror. So let’s dive in, returning to Spain and what this nation can give us in Extreme Metal.

Now, I’ve heard all sorts of vocal performances out of death metal acts over the years, yet I haven’t heard many that come off with the pained, agonised timbre that Ataraxy have been able to deliver herein. The vocals may not exactly move much where tempo, wavelength or variation is concerned, but in many respects, they didn’t need to because the band understand that element is more than covered by the riffs and songwriting (we’ll dive into that soon). It’s often said that a work of art doesn’t need to be realistic but, it should be believable. That’s the defining feature of these vocals here; Ataraxy have stumbled upon a vocal performance that is equally powerful, frightening but also delivers a quality not many have managed to replicate: torment. I’d be alright to say the riffs reflect this ideal, but it’s much tougher to say the same with a vocal delivery. Utilising a bellowing performance that manages to be simultaneously massive in scope, and short on its reach owing to a strained timbre, the band have a truly unique vocal approach that works for the songwriting they’ve adopted for this album. You feel the pained roar these vocals are putting out there, the strained cries uttered don’t come off with a banal “metal voice”; the audience will genuinely believe the anguish and nightmare this album is putting them through due to this vocal performance.

I appreciate how the band, following on from the initial introductory piece to their record, don’t just launch into a massive assault on our senses. Instead, Ataraxy legitimately spend time at settling you into their sound before pushing your head below the water line and submerging you to their onslaught. The first real song on this album, “The Bell That Constantly Sounds”, is the longest on record and I don’t think that’s by accident. By giving audiences the longest track straight away, and subjecting them to their style of songwriting, the band are effectively showing us that we shouldn’t worry about irregular pacing or unending adrenaline; Ataraxy acknowledge herein the importance of showing the difference between a race and a sprint. The songwriting ensnares you, it’s slow and sinister segments serving as the atmospheric quality that binds our curiosities down before the band unload the more ravenous, and murderous, intentions this record will eventually unleash upon us. What it goes to show is how planned out their songwriting actually is, it isn’t long before their ruthless nature subsides and the steadier, drawn out sections return. It’s nigh on death/doom at times; it’s the kind of songwriting that pulls you in and sees you pleading to it to reach no end. 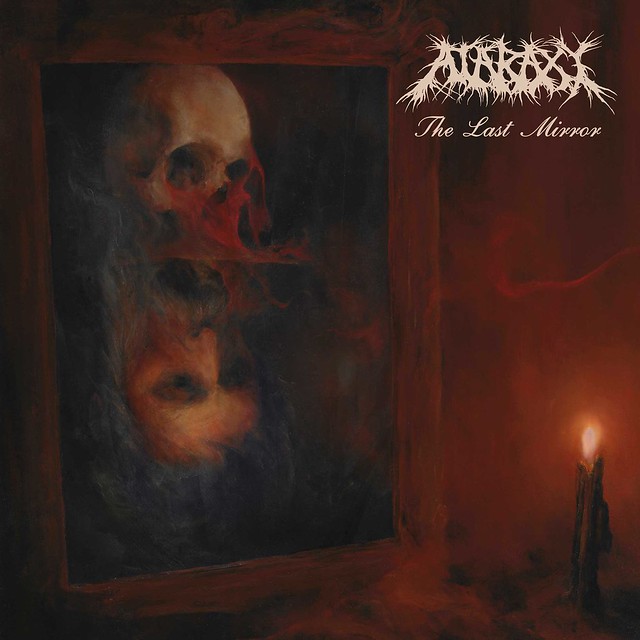 When the band’s songwriting approaches those faster tempos, it really comes off with a particularly punching quality as riffs change and interplay with the bass and drums. The power the band are able to infer is immense and, if anything, it’s all the more heightened precisely because they’ve adopted this back-and-forth songwriting style that sees them utilise the creeping tempos as much as a ripping style would be effective. This balancing act isn’t always easy to pull off, but that’s exactly what Ataraxy have accomplished; whether the band approach a track through faster or slower means doesn’t matter too much in the way of riff quality, as they’re going to land on their feet either way. What also aids the band in this regard is the guitar tone. It’s not this super dense force nor is it a thinned out thing that exemplifies a Swedish sound, instead the band have seen to it that their riffs come off with resolute slabs that strike the album hard, as well as this satisfying twang, in the respect that changes in chords or note forms have resonance to them. You can feel these notes go off, sticking out in your mind which only draws you further in. This is an album that refuses to be ignored.

It may only be a small section of the album’s makeup, but I especially enjoyed what atmospheric and ambient qualities we got herein. As mentioned, it’s only minute but the inclusion of bells and organs and other such atmospheric aspects help to add a great deal more than mere guitar and drum work could infer. Most of the time, these elements are discovered during the band’s slower periods where the drive for atmosphere is most felt and required but there are times when, throughout the faster sections, those forces are brought into play. During such occasions, the more intense side to the songwriting feels amplified and you can feel your senses becoming all the more charged with how much the band are willing to throw at you. Coupled with the band’s clenched style of riffs and the might they deliver, it crafts a record with an ethereal ability for timing, knowing when to strike and with how much vitriol.

In conclusion, this album was something that I really took to and enjoyed. For an album that just crosses the 40 minute threshold, Ataraxy bring plenty to the table to keep you engaged and entertained; the latter of which is delivered in droves. Its songwriting is fantastically balanced, able to bring the best of faster and steadier elements to their sound that doesn’t make either one feel less important to the band’s songwriting. It’s also a surprisingly atmospheric album, and while Ataraxy do employ some elements like bells or organs, it’s nowhere near what other atmospheric death metal acts have pulled off and yet here we have an album that manages to pull us in with total ease. You’re forever on the edge of your seat wondering what the band will do next because no song is a one-track mind. Each track is unique and manages to feel interspersed with songwriting that flows and plays naturally. The Last Mirror is an exceedingly well written album that stands as a pedestal for Spanish Death Metal in 2022.