Although not strictly speaking a new album from the Italian noise-mongers but the first release in sixteen years, including three new tracks and a couple of cover versions, has to be something to commemorate.

Dictatorial Democracy is essentially divided into three distinct sections: the new, the covers and the old, with the first being the three new tracks. From the off there’s a sense that a sixteen-year absence has done nothing to blunt the power of Undertakers nor has it dulled the fury of the band. Best Hate begins with a chunky riff and a large bottom-end hiding a not-inconsiderable amount of groove. The whirlwind drumming and sawing guitar make the track a nod to Napalm Death and when coupled with the grinding vocals and precision aggression you can certainly hear Undertakers’ influences.

In a quick shift the title track is built around a classic rock riff, albeit rinsed through a massive amount of Death Metal, until it is the kind of music you play when needing to smash shit up. The final new track is Religion is a Crime an unrelenting barrage of grinding noise which, together with the other two new songs, demonstrate the range of Undertakers. 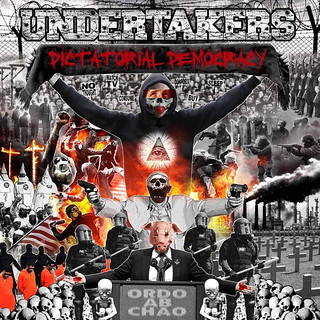 The bulk of Dictatorial Democracy is given over to Undertakers’ history and revisits tracks from the band’s past. It is interesting to plot the development of their sound, from Human Decline, taken from the band’s 1996 album Suffering Within, a pummelling dose of unrelenting death metal, through 2000’s Vision Distortion Perversion tracks I’m the Motherfucker, My Pride and The Night of the Bastards, all remorseless barrages of brutal, slamming death metal with perhaps the merest hint of the groove that will manifest later in their sound.

There is a discernible alteration to Undertakers’ sound by the time we get to the three tracks taken from the split release Noise in Stereo volume 1. Although only three years from the last outing, It’s Time to Die, The Riotmaker and Society Vs Society feel much more accomplished both in their sound and delivery. Still harsh death metal the progress in every aspect of these tracks is palpable. The three share the same level of brutality as the earlier tracks but this time around it’s more polished, the riffs are sharper and clean and the sound is more intense, playing through fat grooves with a greater technical proficiency. As The Riotmaker moves to it’s climax there’s an unmistakeable Max Cavalera thing going on.

Dictatorial Democracy is a frenetic and bludgeoning anthology of Undertakers’ back catalogue which never sounds dated. The new and the old and the borrowed all mix together pretty seamlessly and that makes for a compelling listen.