You wait and wait and wait, and then new thrash albums from old thrash bands seem to come out all at once. We have been in a rich vein of form regards veteran thrashers returning from the grave and giving us what we have missed. Acid Reign, Violence and Heathen to name a few. Long may it continue. It was only a matter of time until southern Californians Evildead, delivered on the promise they showed in the mid to late 80’s and again at the turn of the last decade. 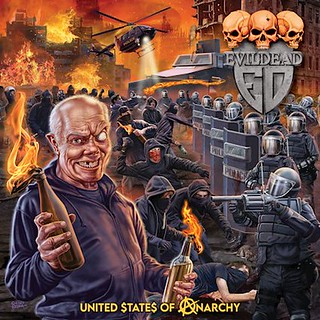 The wait is over and we get nine new songs, one cover tune and an album sleeve by Mr. Ed Repka to swoon over. And this is the crux of the matter. I have friends, good friends, dear friends, who, due to life getting in the way, I don’t see as much as I used to. But when I do see them they are sitting at the same place at the bar, drinking the same drink and laughing at the same jokes. It’s like I’ve gone for a twenty-year piss, come back, and everything is how it was. I’m 50/50 whether I like it or not. It's comforting and alarming at the same time.

The United States of Anarchy by Evildead is this scenario. It's thrash from the golden era, today. It's new, but old. These are classic thrash tunes that could have been demo or cutting room floor sweepings. The song writing is solid. The format is how you’d expect, but so many of their contemporaries have developed, and modified their approach for the new age. Is it refreshing to hear new, old school thrash metal as it should be? At points the drums exceed the capabilities of the recording equipment. Is that because we are now so used to processed and augmented drum sounds that we have forgotten what real drums sound like? The guitar work is stunning, not only the riffs but the solo work and lead harmonies give an individual slant of each of the tracks.

This is good thrash metal, no question. Fresh, innovative and original? Maybe not, perhaps look elsewhere.