When Ben Koller (Converge, Mutoid Man) joined Max Cavalera (Soulfly, ex-Sepultura), Troy Sanders (Mastodon) and Greg Puciato (ex-The Dillinger Escape Plan) in Killer Be Killed shortly after the release of their first album, a second full length recording was talked about very soon. This new undertaking was kept secret from the world until it was ready to be unleashed.

2014’s self titled album was well received but didn’t really set the world on fire and the band only got to play a few live shows in Australia, leaving fans of both the band and individual artists wondering what was left in the Killer Be Killed locker. It certainly seems like real friendships were forged between band mates while collaborating on these albums, an equal slice of the vocal lime-light is shared between the three vocalists showing all egos were checked at the studio door. 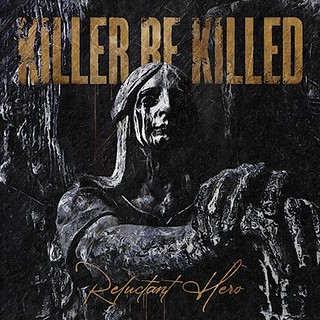 'Reluctant Hero' has a nice warm modern metal sound to it in both its recording and musical style (I refuse to use the term nu-metal). It is clean; even when the dirty, aggressive, vocal talent of Max sneers in. The riffs bounce along in this 11 track release with Ben Koller sitting massive behind the kit. Troy carries tunes very well in his Mastodon style and this marries seamlessly with Greg’s voice. All three of these singers are no stranger to a collaboration and know when to shine and when to pass the baton.

No world changing riffs or songs are contained in this collection; it just plays out like four mates playing some heavy metal because that is what they want to do. Just having fun, and in this world at the moment who can disapprove of that. There are plenty of hooks that sink deeper and deeper into your flesh the more you listen to it, and plenty of sing along moments too. The songs are good; the groove and feeling is cool and to be honest some tracks like the single 'Dream Gone Bad' get better with each listen.

With band members such as this, the anticipation and hype before a release could well be too high. I was left feeling slightly wanting, but I am not sure if this is a fair reaction as this is a very good metal album recorded by four very talented individuals who seem to be enjoying themselves.