Antipodean thrashers Harlott join the ranks of bands with excellent new releases in this otherwise shitshow of a year! Thankfully for all us metalheads the lack of gigs and festivals, has been offset, if that’s possible, by the quality of new albums coming out. It’s as if every band has said, “Fuck this pandemic, we’re going to give the fans some top-class metal to help them get through this”.

'Detritus of the Final Age' is the band's fourth album, and continues the standards of the previous three, in fact each release has seen a steady increase in quality, and 'Detritus…' is no different, it builds on the excellence of 2017’s 'Extinction' and adds a few new choices that the band have never tried before

A ticking clock counts us in (or maybe that should be out, what with the apocalyptic themes?), along with a twisting guitar melody, that nicely leads us into opening track; ‘As We Breach’. A rousing, rampaging brute of a song, a mustering call to arms for all those with nothing to lose, it sets the stage with rolling double bass drums and military snare, riffs shooting out like machine fire. This track incorporates every aspect that the band is known for, bludgeoning heavy slower parts and blistering faster parts, together with hooks that you just can’t shake loose, there’s even room for some blast beats later on, and new boy Leigh Bartley, shows us some of his chops with a fine melodic solo. 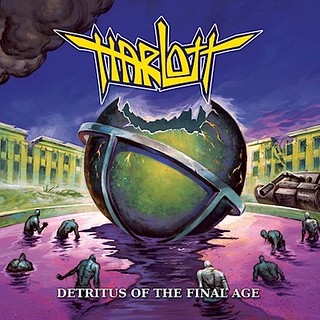 Before you know it second track ‘Idol Minded’ is upon you, a short, sharp, shock of a track, two minutes or so of twisting, serpentine riffing, that drills itself into your brain, the other new kid, drummer Glen Trayhern, proving that he’s a complete mechanical engine behind the kit. With ‘Bring on the War’ the band decides it requires a different approach to pummel your senses and slows it down without compromising one iota on the heaviness, it’s also as catchy as fuck, this one will be with you for days, I promise. The title track is the anchoring point, a massive chorus surrounded by enormous power chords and lightening quick riffs and a super heavy thrash breakdown.

Elsewhere 'Prime Evil' has another huge breakdown part before launching itself into oblivion. The second half of the album sees the band flexing and expanding, using subtle little experiments, that add both depth and colour to their already impressive palette. ‘Nemesis’ is a sprawling epic, which brings to mind some of Metallica’s epics. ‘Grief’ is so emotionally charged, you can almost feel the intense feeling, like static electricity in the air and main man Andrew Hudson gives his best vocal performance of the whole album. Ending the album proper is possibly the bands most ambitious track ever, the marathon like ‘Miserere of the Dead’, an eight-minute piece that builds from humble beginnings into an absolute beast of a track, every moment has been carefully designed to give maximum effect. And they still have time for a quick cover version of Cannibal Corpses’ ‘The Time to Kill is Now’ which finally wraps things up this chapter.

This is a brilliantly conceived, fantastically written, and I’m running out of superlatives to describe the production and musicianship on offer. If you’re not familiar with Harlott, then this is the perfect chance to get in on the action, they are a hugely talented, brutal thrash band, and they deserve your attention. Buy! Buy! Buy!