The children in an inner city school in Manchester gather for a special assembly in the early 00’s. This will be a memorable day for these infants. A guest is visiting the school and he’s about to be announced to the waiting kids. The head master steps up to the lectern;

“Today we have a professional footballer visiting the school".
”OHHHHHH” murmur the assembly.
“He’s Portuguese”.
“OHHHH”.
“He’s a left winger and he plays for Manchester United”.
"It's Ronaldo" the children whisper, barely containing their excitement.
The head master, smiling from ear to ear readies himself for the final reveal...
“Please welcome Nani... yes, that’s right Nani”.
After the tumbleweed blows through the sports hall, some children start crying… 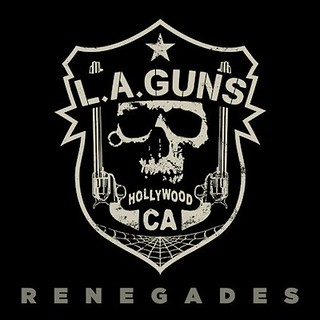 L.A. Guns are Nani. Eclipsed by a mega-force of a band that share the same gene pool as themselves, as was any other hard rocking, sleazy, breezy, rootin tooting band from Los Angeles in the late eighties. If the cards had been dealt differently, we could have been awaiting a “Not In This Lifetime” come back tour whilst we moan about the delayed release date of the new L.A. Guns album. But instead we are in this lifetime. For any band whose career spans four decades and are about to release their 13th album and still play regular gigs, respect has to be paid.

The music on Renegades stands up to the older material but with a more rounded and mature sound. The high octane may have been toned down a notch or two but the passion is there. L.A. Guns where infamous for the big chorus sung with punk rock attitude, laid over a commercial hard rock sound. The hard rock is still there. Less grit in the eye, but still with a slight edge to the sound. However, there is a lack of big, big choruses. The verses ease into the chorus', giving each song a more level listen. We get a mix of rockers and ballads, as you’d expect and the album finishes with a snotty punky little number.

The high kicks may not be as high, and the decadence in the music has subsided but L.A. Guns have stuck around. It used to be hard drugs, it’s now soft cheese. And I like cheese!

Renegares is released via Golden Robot Records on November 13th