During an interview for Down For Life magazine (issue #10 - Autumn 2020, page 20) Ocean Hills frontman, Zoli Teglas, stated some of the tracks now on Santa Monica have been kicking around in one form or another for fifteen years. During this period Teglas has spent his time fronting melodic hardcore band, Ignite and a few years replacing Jim Lindberg in Pennywise, recording their All or Nothing album in 2012.

Santa Monica is not a record born from the recording sessions of either band, rather a fresh new direction for Teglas, one which showcases his obvious vocal abilities and allows him to explore influences and ideas at odds with Ignite’s ethos.

When listening to this record I couldn’t help but be triggered on a nostalgia trip. The atmosphere and sound of the album sits distinctly somewhere between the early-nineties alternative rock scene, emotionally resonant and edgy, but with hooks aplenty and memorable, uplifting choruses, and 80s-era LA Glam. 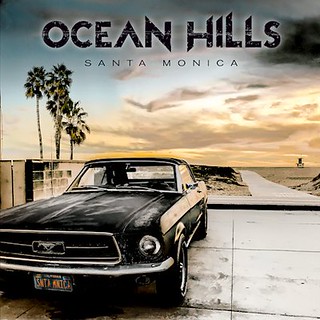 Bound begins the record with a huge bottom and a dirty guitar sound, reminiscent of post-River Runs Red-era Life of Agony. A Separate Place has a distinctly Industrial feel to it and although Death or Liberty is a ballad of heart-felt vocals it never once descends into the Emo territory.

Having never been to California – I sit here in an industrial northern English town under rain-threatening grey skies – my view of the Sunshine state comes from those 80’s Glam bands I grew up with (and perhaps The Lost Boys) and Ocean Hills manage to evoke that feeling again. You can almost feel the heat of the strip on Like a Lady and Angel’s Wings, the former being a radio smash in the making and the latter being the dark to Lady’s light.

From start to finish Santa Monica sounds crystal clear and the production is crisp and sharp. Guitars are allowed to soar and the rhythm section provide an unassuming foundation upon which the record is built. That attention to detail is in perfect keeping with the feel of Santa Monica; whereas Ignite and Pennywise’s sound is enhanced with a dirtier production, Ocean Hills benefit from clarity of the highest order.

Zoli Teglas’ vocals are the star of the show and he demonstrates his range from the gritty to the heart-rendering right across the album. His movements through styles is seamless and smooth and never feels anything but organic. There’s the occasional dodgy lyric – on the title track and for much of Vampire, but that just adds to the old-school feel of those tracks.

Santa Monica ends with an interpretation of the Smith’s morose classic There is a Light That Never Goes Out and, rather than sign off on a downer, Ocean Hills’ version is imbued with the same hopefulness heard across the rest of the record.

You might consider Santa Monica a bit light-weight at times but its unwaveringly positive attitude is just what is needed in these challenging days.