The DamNNation are a brand new band hailing from that South American hotbed of metal Brazil. Formed by Renata Petrelli (formerly of Sinaya), The DamNNation are a power trio mixing together several strands of extreme metal with influences from bands such as Testament, Megadeth, Nervosa and Kreator. Joining Renata (vocals and guitars) and making up the trio are Aline Dutchi (bass and backing vocals) and Leonora Mölka (drums) and this E.P. 'Parasite' is the debut release from the band. 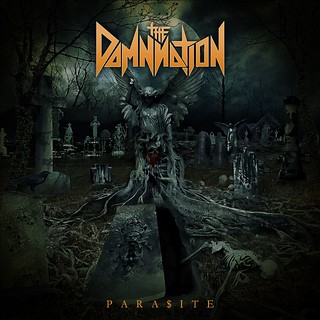 There are a few different influences on the music throughout 'Parasite' with each of the four songs showcasing the slightly different influences of the band. There is a prevailing thrash metal influence throughout all four songs but opening song 'World’s Curse' and the title track have a distinctive groove influence recalling bands such as Sepultura and Machine Head in their 1990’s heyday. 'Apocalypse' was my favourite song of the release and brought to mind contemporary Kreator with its melodic thrash sensibilities whilst the closing song 'Unholy Soldiers' leans more into straightforward heavy metal territory with thrash influences and melodic riffs reminding me of Youthanasia-era Megadeth at points. The performances throughout the E.P. were decent but unremarkable. There is no showy playing with the band playing quite simplistic and straightforward music. The vocals by Renata are reminiscent of Max Cavalera at times and are a bit of a one dimensional bark never stretching anything beyond that.

The DamNNation show promise with their debut E.P. It is some solid mid paced groovy thrash metal which harks back to an era in the early to mid 90’s when thrash bands were changing their tactics, incorporating more groove and bringing the pace of their music down. The DamNNation channel this era throughout the EP and whilst the material is solid it is pretty unremarkable. The band show promise but it isn’t fully realised on this release.