Even the socially distanced are at risk these days it seems. The best laid plans and all that meant that this event, originally planned with a small but perfectly formed audience was changed to a live stream only event via hotel-radio.com. Scheduled to coincide with the reissue of the 2016 release ‘Five Incantations’, this live stream served as both a celebration of this fabulous album but also a sign of defiance from one of the music industry’s most exciting and exhilarating artists. 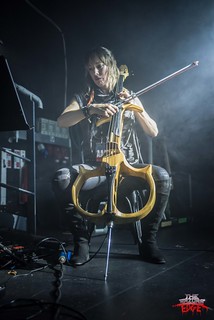 Over 60 minutes, Jo performed the whole of the album. ‘Five Incantations’ comprises five parts, which reflect the cardinal energies of Fire, Water, Air, Earth, and Spirit. Jo broke with her custom and the design, which is to play the entire piece as one, by introducing each part and explaining some of the meanings behind them. Showing her usual humility, she joked, almost lost her place, and welled up with emotion at the conclusion of a set that she may have, in those darkest thoughts, despaired would ever happen again.

Surrounded by four pillars of light and subtle lighting which enhanced the entire experience, Jo began with ‘White Salt Stag’, the energy of earth. Her innovative use of loops and no little skill in her mastery of the cello quickly snared you. As the lights pulsed, the evocative and complex music swirled and weaved, Jo slowly becoming absorbed in her art. ‘The Breathing Hand’ (air) followed. This piece really grapples with the emotions and as Jo moved the piece along, the more she relaxed. With the lights blinking in time with the music, the atmosphere perfectly captured the energies that the music so deftly mirrors.

If you’ve never seen Jo Quail live, you’ll be amazed by her techniques. She slaps and taps the electric cello with the back of her bow in a movement known as col legno. Her cello is a creation of beauty itself, an instrument that she manipulates with great care and skill. All the while her feet dart back and fore to her pedal boards which help in triggering the effects that are a staple of her performance. 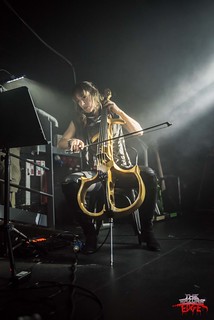 Reaching the midway point, Jo explained that ‘Salamander’ (fire) has, like many of her pieces, evolved throughout its journey, with various amendments, extensions, and reductions incorporated as time has progressed. Her rendition was superb, eloquently delivered with an atmospheric, ethereal mystique that her music generates so sublimely. The final two pieces were delivered in one emotionally charged part, the combination of ‘Between Two Waves’ (water) and ‘Gold’ (Spirit) blending seamlessly. Watching Jo disappear into her own world once more was fantastic, the musician at one with her music.

The dramatic and epic conclusion that arrived at the end of ‘Gold’ was special. The emotion of the event spent, the tension and the drama created dissipating into tears of unbridled joy and relief. If there is a better advert for the necessity of live music in our world, then I have yet to see it. Honest, humble, and incredibly grateful, Jo thanked the team that had made the event possible. All human beings who make live music such an integral part of our lives. They deserve the right to continue in their chosen paths. With a final heartfelt thank you to all who shared the experience on-line, Jo left the camera eye, hopefully heading towards a deserved glass of something cold.