Despatching infectious rock thrusts and engaging hooks with abundant groove and swagger, Greek rock n rollers ROLLIN’ DICE have been tearing up a storm in their homeland, and now the Euro rockers are set to break out to the UK with the new album, Reroll, which is out now via Vinylstore.

ROLLIN’ DICE have also just released a new single and video, With You, which you can watch below!

Although the early seeds of ROLLIN DICE were sown in Athens, Greece in 2011, by vocalist and guitarist Antonis Karathanasopoulos, it wasn’t until 2017 that the band fully finalised and shaped their impressive sound. With a fixed line-up of John Robas (bass guitar, backing vocals), Aggelos Kalogiannis (drums) and Antonis Karathanasopoulos (vocals and guitar), ROLLIN’ DICE have gained widespread recognition in Greece for their enthralling rock sound that pulls from Rush and Black Sabbath to Rival Sons and Kadavar.

The trio’s debut album, Way To The Sun, landed in November 2017, and Greek Metal Hammer swiftly offered the release a much deserved 8/10 review. The band diligently toured the album across Greece and opened for V.I.C. (Villagers of Ioannina City) and Nightstalker. ROLLIN’ DICE played the Rockwave Festival, sharing stages with Iron Maiden, Volbeat and Tremonti. However, shortly after this career highlight, one of the band members suffered a serious health issue and all recording and touring were postponed.

The emerging threesome returned to the fold this year with renewed determination and vigour. The band have now recorded and released their new album, Reroll, and the media are rapidly praising and hailing the release as the group’s best work to date.  The band comment about the album: “’Reroll’ is about entering a new era after a turbulent period. It’s a statement that, no matter what, the band is going to keep on playing and adapting to the difficulties that lay ahead by overcoming them together.” Expressing infectious groove, tantalising riffs and engrossing vocals, this album is poised to put ROLLIN’ DICE on the map. 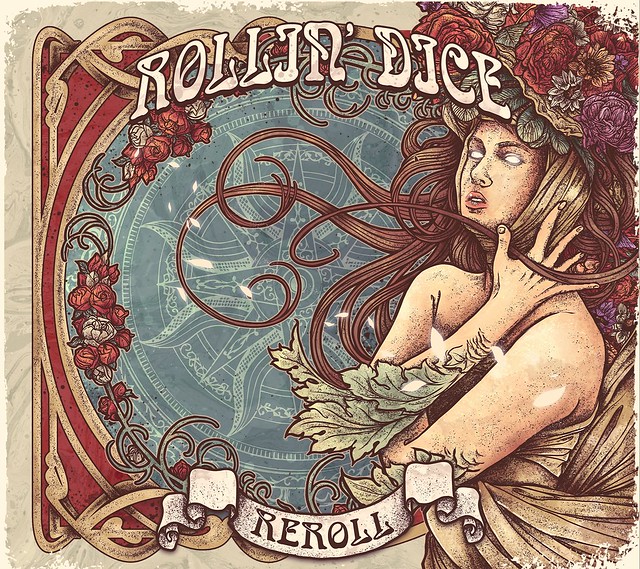