Back in June when the weather was decidedly warmer and we were slowly emerging from lockdown round one, I had the privilege to interview Danyell and Tony F, better known as Dead Posey from L.A. Their E.P. ‘Malfunction’ was one to enjoy, stuffed fuller than a Christmas stocking with influences from a range of artists. To round off the year the band have released ‘Malfunction x Broken Down’, an acoustic retelling of Malfunction. 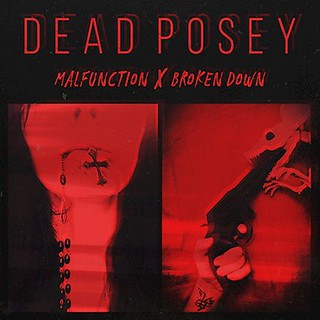 Whilst the duo hasn’t added anything new in terms of songs, the four tracks that are recreated here are all wreathed in emotion. Danyell’s vocals are as soulful as before, her dusky voice matching Tony F’s acoustic guitar and backing vocals perfectly. And whilst this is acoustic, the passion and feeling is almost stronger than the first time round, with ‘Head of the Snake’ and ‘Parasite’ crackling with energy. The gentler ‘Bad Things’ allows Danyell to adopt a drawling, seductive delivery which maintains the sinister edge the original version held, the double bass leading the music with some delicate guitar work layered on top.

The additional track here which may be of interest is a cover of Depeche Mode’s ‘Never Let Me Down Again’. A sensitive version, this fits in neatly with the rest of this classy E.P.. One could question the need for such a release, but in a year such as this, then criticism of artists is unwarranted. A defiant cry to the spirit of music, if you enjoyed ‘Malfunction’ first time round, then this E.P. should also be something to get the listening apparatus involved with. One for the winter evenings, the roaring fire, and a glass of something dark.