Following up their 2018 debut release ‘Evil Upheaval’, Australian death metal powerhouse Depravity have left it late in 2020 to inflict their sophomore record on the world. It’s a wait that was worth it though, as ‘Grand Malevolence’ crashes into the upper ranks of the year’s death metal releases.

Combining elements of technical and old school death metal, the high-level musicianship blends with some of the most ferocious and cranium cracking brutality you’ll hear. There is a pace about this album that is not only relentless but also almost uncontrollable. The opening song ‘Indulging Psychotic Thoughts’ could hardly be better named, the chaotic and riotous track capturing a raging mind in full flow. Sharp changes in tempo merely provide a minimal reprieve from the aural battery. 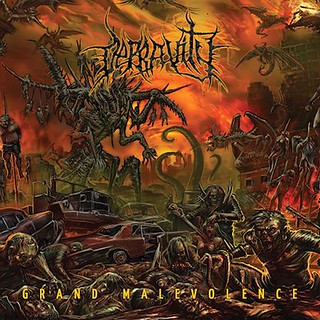 Rarely does a brutal death metal battery feel so thoroughly unstoppable. This is a herd of elephants charging at full speed. The title track which follows is intense, the screaming guttural roars emanating from deep inside singer Jamie Kay are pure bile filled aggression. The drumming throughout this album is pulverising and hugely impressive. A blistering wall of pounding double kicking, blast beats and driving toms, it’s incredulous to envisage the energy required to make this delivery of death.

‘Grand Malevolence’ also features some highly viscerally guitar work, with the duel attack penetrating deep with multiple lacerating strikes. Tracks such as ‘Invalid Majesty’ and ‘Castrate the Perpetrators’ are fine examples. There are ample variations throughout the album, albeit still badged under the death metal banner with glimpses of extreme technicality and progressive flourishes. The Coming of the Hammering displays a slight change in delivery whilst retaining the band’s no-nonsense approach. The whole album displays an intensity that few bands can properly capture. If you want something that is a jammed with a no-nonsense, in your face approach, crammed full of the heaviest riffs and all the time featuring some superb musicianship, then this album should really be on your list.