Remember the heat of the summer? Those few days when the temperature was uncomfortably oppressive? During that, Hertfordshire black metal duo Zebadiah Crowe released ‘Host Rider’, an album which I described as unsettling. As the temperatures finally plummet to the frost coated mornings, Zebadiah Crowe return with the first of two EPs that revisit the nightmares of Host Rider, albeit with a frenzied twist and injection of hallucinogens. 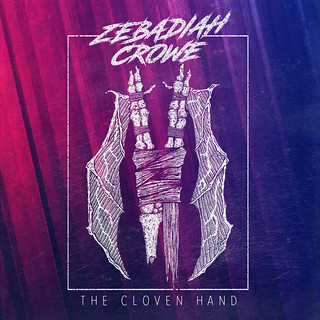 Three tracks, all an unholy alliance between Zebadiah Crowe and the mechanics of Seething Akira and Gods of Ruin. The result is 11 minutes of brain incineration. Pulsing electronica fuses with the demonic gruffness, remixed and warped out of all recognition. These tracks are determined to beast you, drive you into a frenzied rabid outpouring which will leave you damaged and spent.

It’s sinister, dark, and demented. But it’s also addictive and compelling. ‘House of Worms’ burrows deep into the brain, the incessant beat and huge bass rage against the demonic overtures and the gravel gargled roars. ‘Barrens Forge’ at first appears gentler, less intense but that is merely a screen, for the deep, pulsing rhythm which soon latches on and refuses to release its gnarly tentacles. All hell breaks loose on the final track, the insanely explosive ‘Skull Shank’. Increased tempo, increased heart rate, maniacal dancing, and a final opportunity to release yourself to the industrial mania which envelops and consumes. Welcome to the world of black industrial electronics, a marriage born and consumed in the fiery depths (Portsmouth to be precise). With more to follow in the New Year, this is a ride that shows no signs of stopping,

The Cloven Hand is released on 2nd December