Interview: Michel 'Away' Langevin of Voivod
Interviewed by Tim Finch

It's been an eventful year in more ways than one for Voivod. Even with the global pandemic ripping up tour schedules, Voivod have managed to release an E.P., a live album and perform a stunning live stream for the fans. Not one to rest on their laurels there is also a lot going on behind the scenes in the Voivod camp. So it's high time we catch up with them. Tim sat down for a chat with drummer and founding member Michel "Away" Langevin and was welcomed into the Voivod world.

Away: Thank you for having me!

The Razor's Edge: It’s about a year since I last spoke to you, that was on your UK tour with GWAR. A lot has changed since then. How has the last year been for you?

Away: Yes the GWAR Euro tour was the last stretch of the world tour we did for 'The Wake' and they were pretty much the last shows we did!

Earlier this year after taking a break for the holidays, we started writing material in January and February and in March we got locked down here in Montreal. So we had to re-evaluate our priorities. We had a world tour planned this year, but that's been postponed until who knows when? When the pandemic hit pretty badly here we decided to listen to recordings we did last year while touring. We had played two festivals in Quebec and we recorded them multi track with Francis [Perron] who produces our albums these days. So the Montreal Jazz Festival show, some of that ended up on the 'The End of Dormancy' E.P. and then we knew our performance at the Quebec City Summer Festival of last year was really really tight, the chemistry was great and we knew it was a great performance. So here we are today with this brand new live album, another achievement in these strange times.

The great thing though, since we had laid some templates for new material earlier this year, we were able to demo and develop this material through the summer and fall socially distanced. We kept moving forward and releasing videos and we just tried to go onwards. If anything, when or if it goes back to normal we will be more structured.

The Razor's Edge: So you've got material that you've already written and prepared for a future album?

Away: Right now we are writing the new material and eventually we'll be able to get together and jam it. At this point it's difficult, we are experiencing a second wave and we can't really get anywhere or rehearse anywhere. So Snake is building a studio in his house so we can work on the new material this winter. Right now we are just sharing digital files and trying to build out of it. It will morph into Voivodian material when we jam it.

The Razor's Edge: Despite the pandemic you’ve kept busy. We had 'The End of Dormancy' E.P. earlier this year followed by a live album this week. Were these planned or released in response to not being able to do anything else? 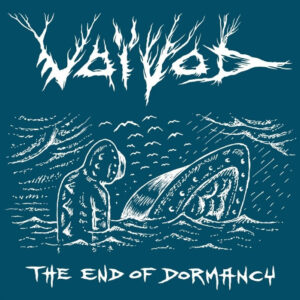 Away: The E.P. was planned, but the pandemic made us focus on the release. It was November last year, right before going on tour with GWAR, we shot the video for the song 'The End of Dormancy'. It was a special version with the brass quintet, who we had invited to the Montreal Jazz Festival show last year. So it gave the occasion to really focus on that and release a video with the E.P. with two live tracks from the Montreal Jazz Festival.

But right after it came out we immediately moved on to projects that had been put to one side due to touring commitments. Felipe Belalcazar, who does all our videos for the live album and has also done a documentary about the band Death, he's finishing a movie about Voivod, which we started way back. We are pretty busy working on that and there is a book in the works too. So it's super busy for everybody.

For me on my own, I do some art on the road and I have spent a lot of time scanning art, I don't know how much time, for future publications and I'm building an online store right now to make my art more available.

The Razor's Edge: Oh right, so you are going to be selling your art to the public.

Away: Mainly, I have just had a comic book made and I have boxes of them here ready to sell online. I also have my book 'Worlds Away' that came out in 2009 and right now I am working on a future publication about my road art.

The Razor's Edge: So talking about the brass element of the newer version of 'The End of Dormancy' E.P. Where did the inspiration to record that version come from?

Away: Well it was when we got invited to the Montreal Jazz Festival, it's really prestigious and we wanted to do something special. Chewy came up with the idea of having a brass quintet and I was super confident because he had invited a string quartet during the recording of 'The Wake' and the results were really amazing. It was a big job for him to write the score for all the musicians involved but it really paid off when we played the song in Montreal and the crowd went wild and it was a great moment. So thats why we wanted to invite them back for the video. The goal was to get the same musicians to come into the studio and overdub the studio version. It was to make the song more like a soundtrack for the sci-fi video. When we played the song in Montreal it reminded me of a band I love called Magma so it was really excellent for me.

The Razor's Edge: So talking about the live album. Was that release always planned or was that a result of being locked down under the pandemic? 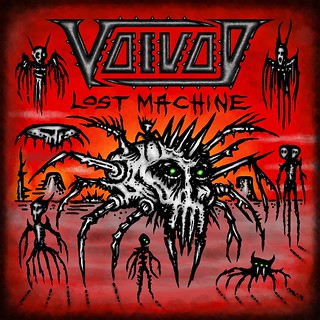 The Razor's Edge:  When you go into a show, knowing you are recording to release, how do you chose the songs for the setlist? Is it any different from planning a normal show?

Away: Not on this occasion. We didn't think about it, we were in the middle of a tour and it was the setlist we were doing at the time. We switch set lists a lot but for the Quebec and Montreal shows it was just what we were playing at that time in the summer last year.

It was not exactly planned at first to release a live album, we really wanted to document the shows for the movie we are doing.

The Razor's Edge: Is that movie going to be a behind the scenes documentary? Is that the plan?

Away: It is actually a movie we started with Sam Dunn who has done all these great heavy metal documentaries. We started it right after the unfortunate passing of Piggy. It was meant to be a tribute to Piggy, but Sam got super busy and we were busy. So right now we are trying to edit the archives with interviews and some animation. We are almost done, Felipe only has to interview Snake and I, but everything has been totally slowed down. Felipe is in Toronto and traveling between the two is really not recommended right now, so we are still working on it.

The Razor's Edge: Hopefully we'll be over the pandemic soon, so what are Voivods plans for 2021?

Away: Well, this year we have given it a shot at playing online and it went super well. So right now we are planning to do more online shows, playing specific albums hopefully. So we are working on that alongside writing new material.

The Razor's Edge: So when you are on the road and touring are there any venues or territories or countries that you absolutely love going to?

Away: We are lucky we have a very good following around the planet and even if we play clubs that are not that big they are super packed. I love playing everywhere but I would say London and Berlin. We had some crazy times in South America. It's really cool for me to go everywhere and meet friends. The travel has kept me going for 27 years and what I miss right now is going out on the road.

It's looking better right now about the pandemic, we are slowly getting news about treatments and the peak of the second wave is going down, so fingers crossed!

The Razor's Edge: So my final question. You’ve had a very long career, some ups and downs. If you had the chance to go back in time, would you change anything you did?

Away: Not exactly. It's a tough question and the best answer I have is Lemmy from Motorhead who says "I don't do regrets". But I know what you mean, if I had to go back in time thats another story. There has probably been a lot of lost opportunities, but we had some amazing highlights, touring with Soundgarden, Faith No More, Rush, doing the Ozzfest. There are plenty of highlights over the years!