41 years after their first self-titled debut, the German kings of heavy metal are once more ready to shatter the eardrums with their latest record, ‘Too Mean to Die’. It’s an 11-track riff heavy slab of heavy metal in the classic Accept sound and possibly their finest release since 2010’s ‘Blood of the Nations’.

To appreciate the importance of Accept in the world of metal, one must go back 45 years to Solingen in Germany in 1976 where guitarist Wolf Hoffmann, vocalist Udo Dirkschneider and bassist Peter Baltes began the real formation of the band. Together with Frank Fredrich on drums and guitarist Jörg Fischer, the band began to gig and in 1979 released their first album ‘Accept’. But it was 1982’s ‘Restless and Wild’ that really drew the burgeoning heavy metal scene’s attention with the title track and the prototype speed metal anthem ‘Fast as a Shark’. These two, alongside the anthemic ‘Princess of the Dawn’ remain setlist staples today.

Whilst Accept experienced many line-up changes during the 1980s, they continued to release some high-quality heavy metal, their distinctive duel guitar heavy riff driven sound and Dirkschneider’s distinctive raspy vocal delivery pleasing metal fans across the globe. In 1987 Dirkschneider was fired from the band, who by now were formed around the nucleus of Hoffmann and Baltes. 1989’s ‘Eat the Heat’ saw the band record with vocalist David Reece, before Dirkschneider returned alongside drummer Stefan Kaufmann, Hoffmann and Baltes, releasing three more albums before Accept went on hiatus in 1997.

Having worked on various solo projects, 2005 saw the brief reunion of the classic line-up (Hoffmann, Dirkschneider, Baltes, Kaufmann and Herman Frank) but the chances of new material dissipated when Dirkschneider confirmed he would not participate in any further reunions. That appeared to be game over until 2010 when Baltes and Hoffmann had a chance meeting with TT Quick vocalist Mark Tornillo. Suddenly there was a new Accept line-up featuring Tornillo on vocals, drummer Stefan Schwarzmann alongside Hoffmann, Baltes and a returning Herman Frank for the first time since 1983’s ‘Balls to The Wall’. ‘Blood of the Nations’ was released on 20 August 2010 and was a muscular slice of classic Accept style heavy metal. Received to generally positive reviews, there were many Accept fans who were overjoyed to see one of the seminal metal bands of the 1980s back, and with Tornillo the band possessed in their armoury a vocalist who not only echoed the gravelly rasp of Dirkschneider but who brought his own style to the new music.

Accept remained relatively stable in terms of line-up until post 2014’s ‘Blind Rage,’ when Uwe Lulis and Christopher Williams replaced Frank and Schwarzmann. 2017’s Rise of Chaos’ would be the last to feature Baltes, who left the band he had been part of since the early days. His replacement was eventually confirmed as Martin Motnik who joined the band. Touring guitarist Philip Shouse was confirmed as a permanent member of the band in 2019, making Accept a sextet for the first time in their history. 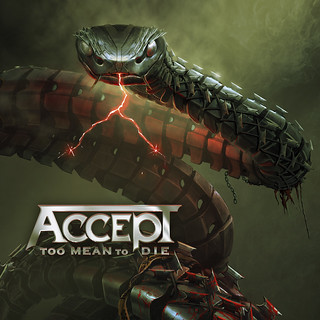 And that leads us to ‘Too Mean to Die’. A title influenced by the pandemic but as a marker of defiance in the sand, Accept have no intention of going anywhere. Album opener ‘Zombie Apocalypse’ should assure all fans of the band that Accept are as good as they have ever been. It’s a thunderous, robust, and explosive track that sees Tornillo in magnificent form, his screams complimenting the huge sound on the record. That’s partly down to the solid song writing but also a credit to producer Andy Sneap who returns for his fifth album with the band.

Accept have never been a thrash metal outfit, but with tracks like ‘Too Mean to Die’ you can certainly see their influence. Crashing riffs and a driving rhythm section work on every song, the pace varies but never slows too much. ‘Overnight Sensation’ is a big dig at those who want to be famous. The line I want to be famous for nothing, just like a Kardashian’ surely one of the most brilliant lines you’ll hear all year. Critical of the influences and YouTube jocks, this is Accept giving it the middle finger to the demands of instant celebrity. It also rocks comprehensively and should get the heads banging in the live arenas of the future.

If you are a fan of the band, you’ll no doubt have already seen the first single, ‘The Undertaker’ which was released in the autumn. A solid anthem that is sure to be a fist in the air moment live, this is classic Accept. The video is brilliant, Tornillo in magnificent form as he snarls through the narrative, the driving thumping bass and drumbeat maintain the momentum which allows the guitars to do subtle work around the edges before the solos kick in.

Elsewhere ‘Symphony of Pain’ sees Tornillo hit those unique screams, the double kicks batter and the triple guitars duel like an Olympic fencing team warming up. With Hoffmann’s love of classical music often overlapping, there is a neat piece of improvised classic movement that kicks in. And if you feared that Accept were considering retirement, then one listen to ‘The Best Is Yet to Come’ will provide reassurance in spades. This is a message of hope and of longevity. ‘Too Mean to Die’ also contains a tasty instrumental which brings the record to a close; the riff heavy pounding of ‘Samson and Delilah’, with its Eastern flavours, swirling feel and playful triple guitar work. A fitting end to an album that is both retro and contemporary. Accept may be closing on 45 years, but there is plenty of life in the old dogs yet.

ICYMI - We had a chat with guitarist Wolf Hoffmann last week, check it out here.