You would be forgiven for missing Molten. Hailing from San Francisco, California and the swollen mass of established and unestablished bands, projects and dreams that are native from that neck of the woods, a thrash metal band with death metal vocals (for the majority of the time) can get a little buried. Their debut was a self-titled E.P. released in 2019. Coupled with another band in a similar genre, with the same name, Molten may just have passed you by. 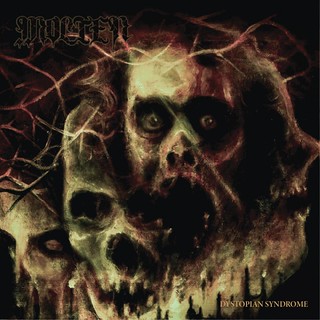 Now the band release their first full length which gives us seven tracks and two short instrumental interludes. Interludes aside; we get a blend of thrash and death metal spawned from the early 90’s. The riffs have a rough edge about them intertwined with softer moments. Chris Corona and Gary Goudreau balance these duties nicely whilst the organic sounding drumming of Damon Lockaby locks in the sound and the direction of the band. The death metal growl of Brandon Bristol gives most of the songs a familiar platform.

The familiar sound may go some way to explaining why Molten are not on the tip of everyone’s tongue. But, they do have some highlights that stand out on this album. The first is bass player Herman Bandala, on more than a couple of occasions we get a bass solo that rarely gets heard in this type of music. The sound is like a certain Bay Area native, sadly taken from us to early, who did bass solos in one take, but it’s refreshing to hear a band with this in their locker.

We also have stand out songs. One being the slight change to the formula that is 'Zombie’s Curse', which brings a more rock 'n' roll feel bought to the mix. The singing relents a little and is more audible and the song has a more fun feel about it. We also get an epic ten minute plus song called 'Rising Embers', a song that goes back and forth between slow and fast, melodic and aggressive. It's booked ended with dramatic instrumental parts.

The day to day, bread and butter songs may get you listening, but you’ll stay for the blackened rock 'n' thrash roll, bass soloing and the epic album closer. Get your tongues ready, you may have a new name on the tip of it.