There’s an otherworldly hum at the start of Martyrs, the first track on Pupil Slicer’s debut record, that fairly well sets the scene for the carnage about to ensue. For there is something not of this Earth in the Banshee-wails of Kate Davies in the way she caresses her guitar one moment, conjuring some fragile, uplifting notes before going all Cruella Deville on the poor instrument and wringing terrified screams from the six-strings.

If you’ve managed to catch the taster-track, L’Appel Du Vide or the recently releases single, Wounds Upon My Skin, you should be pretty familiar with the place Pupil Slicer are coming from and how unrelentingly they are in the execution. Once Martyrs kicks in it is a frenzy of dissonant guitar work, polyrhythmic drums and fuzzed-up bass; think Converge or Dillinger as disparate musical passages crash into each other and the screamo vocals reveal something of a schizophrenic aspect to the proceedings. 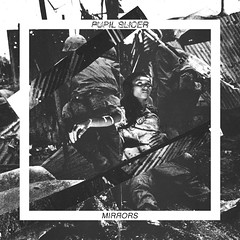 Mirrors is interspersed with short blasts between the main tracks, none of which last more than two minutes, but add to the uncanny nature of the record. The guitar sound on Stabbing Spiders is true to its title; Panic Defence plays out a spastic rhythm and closes with something akin to 70s low budget horror; and Vilified’s lo-fi drum supports a track that sees itself pushed to the limits of where music transcends into something else altogether.

Although Pupil Slicer operate mainly in the post-hardcore/ mathcore area, they are not in any way wanting to limit themselves to a single genre. There’s no little bounce to be heard within the rampaging L’Appel Du Vide, and as the track hurtles to its conclusion it does so in an unnerving, synthesised drone.

Husk and Wounds Upon my Skin revisit the idea of monumental groove in slower, grinding tracks, reminiscent of Pig Destroyer and both featuring some more-orthodox chugging. Husk’s stabbed chords and fuzzed bass against Wounds’ devastating hits in which every syllable lands like punches from a heavy-weight boxer.

Mirrors is very much a both/ and record in that it is both cerebral and visceral at the same time. Like the aforementioned Converge and Dillinger, it all sounds like a mess to begin with, but – and to quote Gremlins: to hear one has only to listen – a little time spend and Pupil Slicer will deliver great rewards, both intellectually and slacking the primal desire to get into the pit.

For there is a dark psychedelia hiding among the jazzy breakdowns and black metal sympathies. Mirrors Are More Fun than the Television and Collective Unconscious sit at the end of the record and both clock in at over six minutes, using their runtime to demonstrate a more controlled delivery and to prove what an accomplished band Pupil Slicer really are. Collective Unconscious, which closes out Mirrors, begins with an eastern-style guitar before switching to a progressive, blackened doom riff. It is the first time Mirrors shows itself to be openly hook-laden and, as the most orderly track on the record, you might well find yourself tapping a foot along to it.

Although it’s still only February I can safely say that Pupil Slicer’s debut will be in contention for my 2021 top picks come December.