Valentines Day will never be the same again! This February 14th the king of black metal releases his latest solo effort, the first in a series of two E.P.'s. 'Telemark' named after his home region in Norway, is a five track beast of an E.P. highlighting how expansive and talented a musician the man is. The release see's his first forays into writing in his native tongue too as three of song feature Norwegian lyrics. Of this concept E.P. he commented:

"I decided early on that I wanted this to be very purely related to black metal aesthetics. I wanted to distil the basic, bare bones black metal influences of my musical roots, given the overall concept, writing something for and from Telemark. I decided to do Norwegian lyrics for the first time, too. It feels very much closer to home in many ways.”

The E.P. opens with 'Stridig' the haunting musical opening leading into Ihsahn's dark vocal delivery. If you aren't fluent in Norwegian you may not follow the lyrical content, but its delivery is from a beastly place, the music is urgent, faster paced and slightly more up beat than traditional black metal. Keyboards and a brass section add extra dimensions to the sound, giving the song crescendo's not normally on offer in the genre. 'Nord' also feels slightly more upbeat than your traditional black metal ditty. It still has the dark, demonic undercurrent, but the jazz bridges set it apart from the crowd. Utterly demonstrating the range of musicianship and song writing the man has to offer. 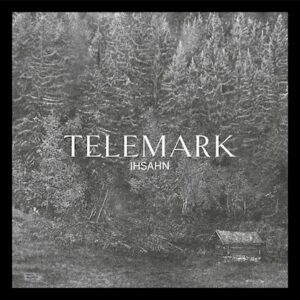 Title track 'Telemark' is the epic 8 minute behemoth of a song. Still with the hints of jazz from the previous songs, but this is a more progressive piece. The length of the track allows experimentation, pushing the boundaries of what is acceptable black metal, adding multiple styles into the melting pot and seeing what happens. Fluctuations in pace, aggression and mood are prevalent throughout the track as he weaves a story of his homeland in his native tongue.

Following the three original songs on the recording, Ihsahn experiments with two covers. First up is Lenny Kravitz song 'Rock 'n' Roll Is Dead'. If you were expecting a full on black metal version of this rock classic then you may be slightly disappointed. Ihsahn again stretching his metaphorical musical legs with this number. Whilst his vocals are gruffer than that of Kravitz, he lifts his vocal range and the added brass backing section give this number depth and warmth. This is a wondrous twist on the idea of a cover song and a welcome addition to the E.P.

The recording is closed out with an Iron Maiden cover, 'Wrathchild'. The song is dripping in NWOBHM stylings as again he pushes the boundaries of what we expect of this release. Those raucous guitars synonymous with the legendary band let the man show off his fret board mastery, whilst the brass section again kicks in to give the song a dimension you've not heard within it before.

If you were expecting a dark, demonic black metal release you may be disappointed with this album, Emporer this is not. But within 'Telemark' Ihsahn has written and produced an experimental and progressive sound based off his roots and growing further beyond the boundaries of what we thought acceptable in the genre. If given the chance the E.P. will have broad appeal. You don't like black metal? It doesn't matter! You will enjoy this!