‘In Absence’ is the debut full length album of Canadian progressive melodic death/thrashers Cathartic Demise, a relatively new 4 piece, who have already released an impressive three track self-titled E.P. back in 2019, this time the band have sharpened their song-writing and you can see that the extra time together and the experience of playing live has really added a  fresh maturity to the new material. Not that the band have strayed too far from those initial recordings, in fact ‘In Absence’ is very much the logical next step, the band have definitely grown organically. 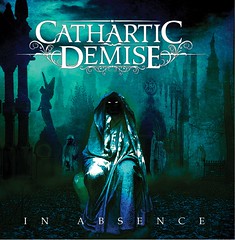 Starting with the brilliant mood builder intro of ‘With Lust’ which is chock full of delicious melodies and enticing guitars that are carried beautifully into first track proper; ‘For Power’ a fast, melodic and heavy hitting track, probably the most straightforward of all the tracks, it’s a great choice of opening the album, blast-beats sit comfortably with a hook laden chorus. The band continue the melody, and even increase the speed with the remarkable ‘Blade in the Dark’, some of these sections here are just blistering, the band must have had buckets of sand on standby and fire extinguishers at the ready just in case the fingers of guitarists Taylor Wroblewski and Bennet Smith (also lead vocals) didn’t spontaneously combust, there must have been smoke at least!

Just as impressive as the guitars are the chops of drummer Angus Pike, his atomic clock-like precision the building block of all the band's histrionics. And filling all the gaps left are the adroit bass lines of Aaron Tanner. The band apart from speed and melody, aren’t afraid to experiment, take album centrepiece, the 8 minute ‘Pale Imitations’, which starts with an almost doom like procession, before first one guitar quickens the pace, and then before you even realise it, the whole band is travelling along at almost full  stride. Epic stuff. The title-track is probably my current favourite, it builds stunningly from a gorgeous chugging guitar riff, more and more layers being added until it’s a complete monster of a track, and a complete synthesis of the rest of the album. ‘Waves’ stands out from its brethren as being the slightly odd man out, in a good way, it’s on the whole slower and Smith’s vocals for the first half are much cleaner than on the other tracks, and is a nice contrast.

These days it’s almost unnecessary to talk about production, as there should be no excuse not to sound sonically excellent. And that’s no different here, the guitars have a bite to them that would make a Doberman Pinscher jealous yet are clean enough to make the melodies as clear as crystal. The drums are solid although the kick drums perhaps come across as a bit on the artificial side on occasion, but that is being very critical, and in no way impairs the enjoyment, while the bass is the thick viscous glue that holds everything else together.

If you like your metal melodic, modern, fast, yet heavy as a concrete slab, this is very much an album to check out, it reminds me at times of Sylosis, and also Trivium, but without as many of the clean vocals. Technical yet without the need for a musical slide rule to appreciate. A great contemporary metal album