Limited to 5000 copies and available only on vinyl, this eighteen-disc retrospective of one of the most interesting bands of their generation arrives not a moment too soon. For – and bear with me on this analogy – in a world being increasing divided along a myriad of lines, artists like Omar Rodríguez-López and Cedric Bixler-Zavala – the creative forces behind The Mars Volta – smashed barriers and embraced as many influences as they saw fit.

Trying to explain what The Mars Volta sound like is a little like trying to capture smoke: hardcore, post hardcore, alternative rock, psychedelic rock, free-form jazz… the list goes on. Citing artists as widespread as King Crimson and Miles Davis, through Black Flag and Throbbing Gristle to Bjork and the Aphex Twins, gives you something of the scope we’re dealing with here. 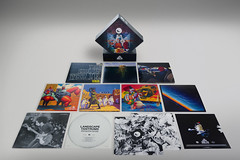 And, when you’re influencing bands like Mastodon and gaining admiration from the likes of James Hetfield and Neil Peart, you must be doing something of note.

Formed in the aftermath of the end of Omar’s post-hardcore band, At The Drive-In, The Mars Volta released the three-track EP, Tremulant, in 2002 and, a year later, the band released their debut album Deloused in the Comatorium, which saw them on a European tour backing up Red Hot Chilli Peppers.

The legacy of At The Drive-In can be heard on Deloused… in the frenetic dissonance of Inertiactic ESP and in the sharp, stabbing verses of Eria Tarka, before they give way to upliftingly gentle passages of musical beauty. This new remaster adds even more depth and warm to the guitar parts of Roulette Dares (The Haunt Of) allowing those jazzy notes to ring crystal clear as the delicate bass rumbles subtly beneath.

It is the mix that will be the secondary draw for the listener with this collection. Frances the Mute’s The Widow is a lush banquet for the ears – from the huge, emotionally charged vocal performance by Cedric to the literal symphony of brass and organ – all serve to further demonstrate that The Mars Volta were way ahead their time. This second album opens with a guitar part not unlike parts of Led Zeppelin III, before switching into a funkadelic exploration of the band’s obvious Spanish influence.

That Spanish influence continues on 2006’s Amputechture with the guitar-track Asilos Magdalena, whereas elsewhere the progressive-rock-jazz symphony continues in the Pink Floyd-esque Day of the Baphomet, complete with saxophone accompaniment. In fact, it’s curious that by the time you get to The Bedlam in Goliath, tracks like Metatron and Wax Simulacra begin to sound almost mass appeal in comparison to what surrounds them.

There’s something of a Zeppelin-feel to Octahedron’s opening track Since We’ve Been Wrong. This 2009 album feels to be The Mars Volta’s most restrained work – it’s certainly their shortest - and I feel it almost the band’s The Burning World or Damnation. Songs like With Twilight As My Guide and the closing Luciforms eschew the chaos and, instead, serve up heart-rending expositions.

It would be three years before the release of Noctourniquet which seeks to synthesis the earlier sounds of Deloused…with the later sound of Octahedron. Beginning with the Industrial-tinge of Aegis, Noctourniquet sounds much fatter from the outset, through to the dance-adjacent nature of Zed and Two Naughts.

I said that the lush mix would only be the secondary draw. The prime reason The Mars Volta fans will want to seek out La Realidad de los Sueños - The Reality of Dreams, - is going to be for the inclusion

of two ‘lost’ songs: A Plague on Your Hissing Children and Eunuch Provocateur; but mainly for the presence of the mythical beast – the Holy Grail, if you will – of the fabled Landscape Tantrums, the rumoured unfinished recordings of Deloused in the Comatorium, whose very existence has been a mystery to even the most ardent fans.

A Plague Upon Your Hissing Children is the kind of rich banquet of a track you would expect from the band – jazzy, psychedelic and unpredictable which, in a strange way, is exactly what you expect from The Mars Volta. Eunuch Provocateur isn’t so much of a lost track as it appears as the third track on Tremulant EP, but this new interpretation somehow feels richer and more nuanced. Also included is the dissonant strings of Mr Muggs, a track akin to nails scratching down a blackboard, yet somehow compelling.

So, what about the central draw for this package? Landscape Tantrums features eight of the eleven tracks from Deloused In The Comatorium, arranged in a slightly unfamiliar running order. Only Tira Me A Las Aranas, Cicatriz ESP and Ambuletz aren’t represented here, with Roulette Dares now acting as the opening track.

Although rumoured by fans for many years, the master tapes have been in the possession of Omar Rodríguez-López who has now allowed their release.

The recording of Landscape Tantrums reveals a sound that is more raw, more emotional, more tightly coiled, the ghosts of At The Drive-In being writ-large throughout much of these recordings.

These sessions were produced by Omar himself, before Rick Rubin arrived to work on the finished product, allowing Cedric Bixler-Zavala to find his voice and giving Omar the support to develop the self-confidence to go on to produce Deloused’s follow-up, Frances the Mute.

It would be easy to dismiss Landscape Tantrums as little more than merely demo versions of the tracks from Deloused… but the rawness and bigger bottom end, coupled with the lack of refinement when compared to the Rick Rubin versions, makes the likes of Roulette Dares and Inertiatic ESP in this unfinished condition, to be worthy of attention in their own rights. The chaotic nature of these recordings show the hangover from At The Drive-In and how the ethos of that band informed much of the early processes for The Mars Volta.

La Realidad de los Sueños is completed by a substantial hard-cover book of behind the scenes photography and a couple of badges and will prove to be the Ark of the Covenant of Mars Volta merchandise. The size and scope – and presumed price tag – of this collection will probably deter all but the most rabid listener, but that shouldn’t prevent anyone else from seeking out the band (and At The Drive-In, too) as the sumptuous and challenging nature of their music is something truly to behold.

Your ears will love you forever.