You’ve got to be careful when you call yourself “Speed Metal”. If you do, everyone instantly thinks back to the Megadeth posters from the 80’s when they were known as the “state of the art speed metal band”. Everyone holds you up against this extremely high benchmark. And most don’t make the cut. 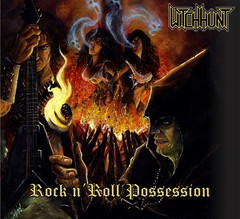 Witchhunt give it a good go! Fast and punchy riffs and the band are extremely tight in places. The vocals are a major talking point. Most of the time the singing is reminiscent of Tom G. Warrior from Celtic Frost, however at any given moment the pitch goes extremely high. So much so that dogs begin barking, garage doors start opening and Mariah Carey starts crying her eyes out. The occasions when the high pitchness occurs is slightly sporadic. When you're listening to this album it can be slightly unnerving knowing that you may get a high-pitched squeal in your ear any minute.

Witchhunt do cover a lot of ground over these 10 tracks. We have full on speed metal for the opening track 'Inquisitor', which has solos a plenty interspersed between verse and chorus. We have a ballad in 'Hijos del Fuego' which is sung in their native tongue, the song itself starts slow but speeds up towards the end. 'Margaret' opens up like 'Painkiller’s little brother and continues in the same vein for the rest of the song. My personal highlight 'Witchhunt' (the song) has a slightly slower riff than all the other tracks with a pinch harmonic that brings to mind Black Label Society and Machine Head. It speeds up for the second riff and includes a good hook filled chorus. At times they do stray into power metal and 'Forces of The Night' does sound like a thrash band covering an older heavy metal tune. There are a couple of instrumentals on this album and also a demo track which has slightly poor sound quality.