Album Review: An Autumn For Crippled Children - As The Morning Dawns We Close Our Eyes
Reviewed by Dan Barnes

Arriving just a year after All Fell Silent, Everything Went Quiet and recorded during the summer of 2020, reclusive Dutchmen, An Autumn for Crippled Children (AACC), return with another collection of blackened post metal.

As the Morning Dawns We Close Our Eyes is AACC’s ninth record and arrived with an immediacy rarely heard. Without the benefit of an intro, Carefully Breathing has the effect of destabilising you from the get-go, which is very much what the whole of this album seems to do. Although the music is instantly in-your-face and you are greeted with a repeating riff, it is uplifting, maybe even joyous, in its nature and its clean instrumentation is a far cry from the black metal vocals on offer.

AACC are one of the forward-thinking black metal bands who, like Alcest, Deafheaven, et al, use the Scandinavian sound as a platform upon which to build towering and emotionally charged structures. Incorporating a myriad of elements into their sound. 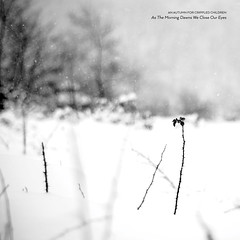 Of You Light maintains the black metal rasps but delivers them in a more sombre and introspective manner in keeping with the emo-post-punk-post-hardcore feel to the music. Here, as elsewhere on As Morning Dawns We Close Our Eyes, the use of keys emotes a melancholia and becomes a cradle in which light guitar lines can lie. They are even able to give the tracks the room to breathe and to explore musical ideas which traditional black metal’s devotion to speed and Satan might not allow.

Splendour Unnoticed starts to see more aggression from the guitars and, although the keys still sweep throughout the song, the fretboard triplets and heavy cymbal use adds to the fatter and more icy sound. Melancholia is driven by an urgent drum beat and contains a demonic bridge ready to summon something from the very depths, yet still manages to hold everything together with an uplifting melody.

Eschewing established black metal subject matter in favour of exploration of love, death and the eternal (and unanswerable) existential questions, AACC’s music juxtaposes the use the grim black metal with a positivity and hopefulness.

The songs on the album rarely develop or end the way you would expect and this provides the listener with something of an emotional journey, through despair to rapture. AACC’s take on the whole of their black metal ethos is one of experimentation, in seeing which other genres and styles would be best placed to complement and enhance the songs.

That AACC are a faceless entity further enriches the emotional impact of As Morning Dawns We Close Our Eyes as you realise you are not listening to an individual’s personal experience, rather an exploration of the combined human condition.

However, don’t expect to see the band playing a venue near you anytime soon, as AACC do not tour – though they might change their minds if they were offered the opening slot on a Burzum/ Darkthrone co-headliner.