Talk about getting your foot in the door. Reeking Aura, a death/doom metal act, have only been active since 2020. In that time the band released their first EP within the same year: Beneath The Canopy Of Compost, and now another two years on the band look to release their first full length release titled Blood And Bonemeal. Its still early days for Reeking Aura however it appears these New Jersey guys are truly committed to releasing some crushing extreme metal. What grabbed me about tis album initially was the artwork; an unusual combination of wispy colours that strayed away from conventional aesthetic. I was more than ready to check this record out so let’s waste no more time at getting stuck into Blood And Bonemeal

I love how thick the guitar tone is here. The band may lean more towards death metal than the doom side of things, however that doesn’t mean their sound can’t propagate this sense of damnation coming towards you. I guarantee you the last work of death metal you listened to will feel light compared to what Reeking Aura have in store here. As a result, the riffs possess this commanding presence that can’t be hid from. There’s no shying away from the band’s performance since the guitar tone feels so total. If anything, choosing this specific guitar tone has almost heightened the impact the riffs may render; changes in chords or direction of songwriting feel deeply accentuated, as if the band have outlined their entire sound in a bold border. You can’t help but have your attention drawn to the band because it is so encapsulating, the record doesn’t give you any alternative choice as to where your attention may lie.

The vocals also complement the record in a great way too. Due to the evil and in your face nature of the songwriting and guitar work, the vocals needed to be just as malevolent and brutal to match the general sound the band have been vying for within. I don’t believe it’s merely down to the brutality the vocals are able to get across, it’s also the depth they’re able to reach, and then to stay there. Listening to this record is like staring into the churning void as one may see souls in suffering purgatory. While the band’s doomed aesthetic comes through here and there, it’s really through the death metal that the band emit their doom qualities. That’s impressive to state as the band do play with a ruthless style but it never feels like they’re going for a destructive vibe. The vocals help in this matter, capturing that despairing nature, and painting this record as one of a terrible fate as opposed to a forlorn existence. I was surprised to recognise how long the vocals could be sustained too amidst the lowest pitch their frontman was capable of pulling off. Not only does it further the evil embedded within but, it’s good to note how the instrumentation could still be enjoyed alongside it. Praise therefore goes to the mixing, enabling the audience to enjoy deep riffs and vocals alike at the same time. 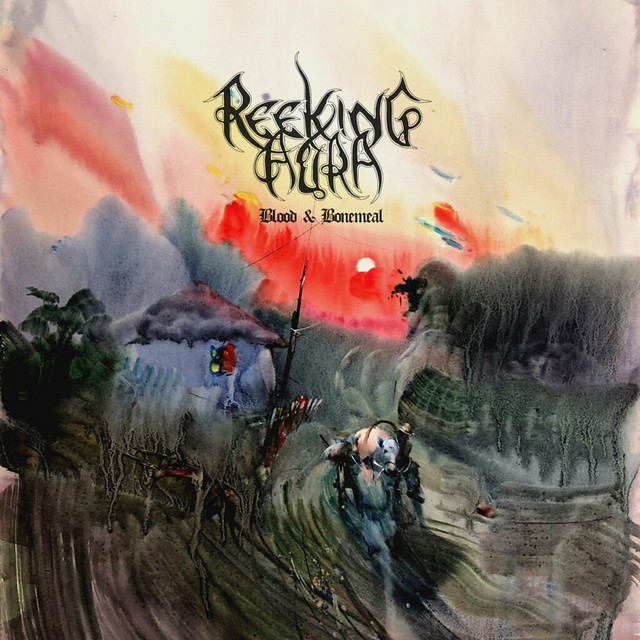 But Reeking Aura don’t merely play conventional death metal; there’s still the doom quality that needs to be injected somewhere. Sometimes the songwriting will break from what we’ve come to experience from the band, utilising haphazard and broken riff segments separate from the often streamlined songwriting approach the band utilise for the majority of their record. It helps to not only provide variety to their songwriting, but also demonstrate to audiences where they want you to observe and take notice. In addition are the acoustic pieces the band throw in as well, notably the title track “Blood And Bonemeal” or “Burying The Hatchet” where an acoustic guitar closes out the last 90 seconds of this song. It may not be for long but it helps throw a wrench in what audiences may be perceiving about this record, readying them for potentially more surprises. Riffs may be piercing, chunky etc, there’s something unique to be found within every track.

With a track like “Burying The Hatchet”, where it is amongst the most monstrous and powerful the band have to bring down on us, it’s essential that the drums are slightly lighter variation that they are on record. Had the drums been heavier and felt more compact, I believe the record would have felt a little too crushing for its own good. Thankfully, that isn’t the case and the drumming is much easier to experience alongside the pounding riffs. Again, I need to give credit to the mixing; the drumming is light and crisp even while the vocals and other more crushing elements are going at it throughout the record. Even the brief sections of blast beats are a nice welcome; here the drums aren’t just setting the record’s tempo, they’re helping to alleviate the record’s weight that in turns allows us to listen with greater ease to its devastation.

In conclusion, Reeking Aura give us an album demanding your attention. It’s a work of death/doom however the doom quality isn’t so immediately apparent. It’s only after you’ve listened to a few tracks off the record that you understand what the doom element actually is. It isn’t trudging through the mire or in a well of despair, Blood And Bonemeal’s doom is subtle and comes through, most of all, in the band’s approach to songwriting; whether it’s slowing their tempo down or utilising the vocals for the effect they require. From a death metal standpoint it’s great, it’s a really engaging album and from time to time you’ll be hard pressed to not headbang along to some tracks herein. I really enjoyed what this record and band had to offer and I can confidently say Reeking Aura are a band I’ll be keeping my eyes on, for future release to come.