Is Myles Kennedy the busiest man in rock right now? Quite possibly! Not only being kept busy with his Alter Bridge duties, but he’s working on a new album with Slash, due out later this year. To top it all off this week he releases his second solo album, ‘The Ides of March’, the follow up to 2018’s ‘Year of the Tiger’. It’s safe to say he’s kept himself occupied throughout the pandemic, in fact in a recent interview with Planet Rock he stated he was concerned he didn’t have enough time to write his solo record before the pandemic hit, although with the world grinding to a halt it has enabled him to complete the work. 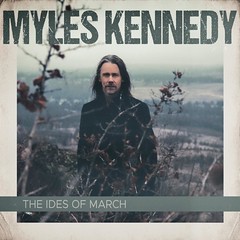 The focal point of opening number ‘Get Along’ is the majestic voice of Kennedy, his vocal the real driving force behind this album, a wonderful bluesy number in style and lyrical content. But don’t let yourself think that’s setting the tone for album. ‘A Thousand Words’ mixes it up, more upbeat, keeping the listener on the edge of their seat with it’s emphatic heartbeat. The chorus drawing inspiration, it would seem, from the new wave of classic rock and the sound some more modern rock acts are producing.

The album twists again as ‘In Stride’ takes a heavy southern American influence whilst title track ‘The Ides of March’ is more softly spoken in delivery, ebbing and flowing as it takes the listener on a journey. From here on, for a short while the album softens, the songs heartfelt, delivering a message whilst letting the listener settle into a comfort zone. ‘Tell It Like It Is’ jumps out of that pattern, hints of southern rock and blues again as the pace fastens bringing you back to the edge of your seat. And then comes a series of blues inspired numbers, ‘Moonshot’, ‘Wunderlust Begins’ and ‘Sifting Through The Fire’ all southern in feel, in fact drawing heavily on the influence of the Allman Brothers.

Alter Bridge or Slash this is not, Myles Kennedy’s solo albums allow the man to stretch his vocal talents yet further. ‘The Ides of March’ very much fitting on the more blues driven side of things. An album that will give the listener so much when the time is invested, wonderful song writing, delivered perfectly to highlight the range of talents Kennedy has to offer.