Nineteen More Bands Added To The Bloodstock Festival 2021 Line Up

With the weather slowly warming up, we’re counting down the days to BLOODSTOCK. There’s a veritable feast of new bands to get your ears around before August - some you may know, some you may not (yet), but one thing is for sure - they’re all determined to help make this year’s BLOODSTOCK the absolute best fun you’ve had in over a year.

Landing the Sunday night Sophie stage headline slot are festival favourites, EVIL SCARECROW. With some of our overseas bands having to cancel, many of our UK friends are heroically saving the day. We asked SCARECROW to come join the fun and they said, “So, we haven't played as a band for a year. Not even a practice! We closed and abandoned our rehearsal room. Our van is gathering moss on a driveway. We have 2 new members who we have never played with. One of them was our main stagehand and we have not replaced that position. Basically, EVIL SCARECROW are, in reality, unconscious in stasis, floating through the void of space until we clear the disease-ridden Van Allen radiation belt. Along came the good ship BLOODSTOCK, who nudged us awake to see if we will come and play with them. “No", we mumble, "No band yet. More sleep”. They return with a cup of tea and a bacon sandwich. “It’s headlining the Sophie Stage” they whisper. Shit. So, we’ve sprung back into life! We are dusting off our props and may even have a band practice or two. So, if you want to see the most shambolic, unpracticed, unprepared EVIL SCARECROW show ever, then join us! We can’t promise our usual super-polished -ahem- performance. But we promise to bring the biggest, messiest, stupidest party yet.” We believe them and we’re all about it! Remind yourself of their skills via their one-take video for ‘Hurricanado’ and get ready to close out the festival with a Scarecrow party!

With the Metal 2 The Masses events happening soon, as well as the winners from that initiative, the New Blood bill is rounded out with a number of bands selected from online applications and we’re happy to give these additional bands the opportunity to showcase their wares at BLOODSTOCK. We had over 600 applications and these lucky acts get a slot on the New Blood stage. Grabbing a Friday slot are Gloucester metal squad BROKEN JAW and Liverpool death metallers COLPOCLEISIS. Saturday’s bill will feature Brummie rockers DEVILFIRE, Irish sludgemeisters GREY STAG and purveyors of ‘true metal’, HANOWAR (yes, they are what you think they are)! Sunday’s bill features a swathe of fresh blood, including mask-wearing, theatrical noiseniks THE INJESTER, classic rockers SOUTH OF SALEM, stoner/doom squad SON OF BOAR, Midlands thrashers WIRED, THIS IS ENDLESS (featuring members of Onslaught/Ted Maul), power metallers FELLOWSHIP and SORCERESS OF SIN, melodic death metal outfit FROZEN IN SHADOWS, southwest metal 5-piece HYBRIDIZE, psychological death metallers STRANGLE WIRE, Irish modern metal outfit WORDS THAT BURN, black metal sonic terrorists DEITUS, and GHOSTS OF ATLANTIS (featuring members of Devilment).

The remaining New Blood bands will be announced after the M2TM events in July, so stay tuned for more additions then. 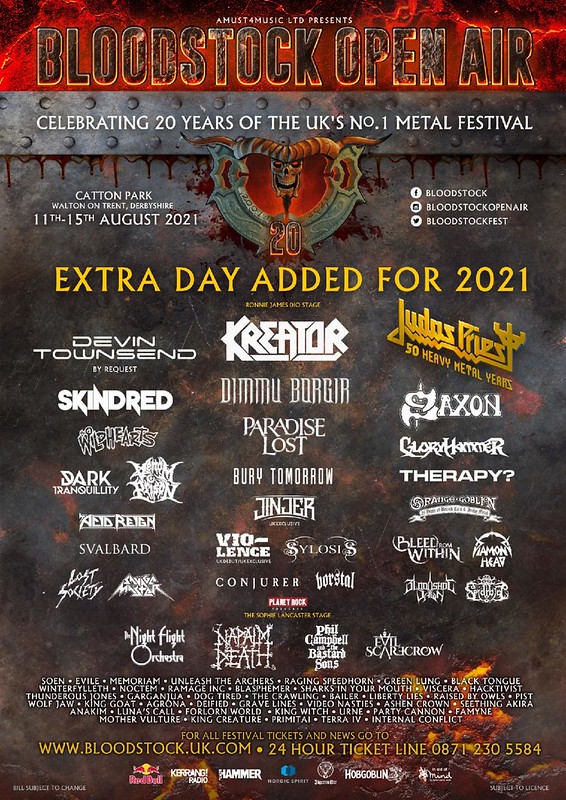