I enjoy listening to live albums, as I like to find out if it has really captured the true essence of a band, that’s sometimes just isn’t there on record, but 'Live at Bronson' from Mondo Generator takes their reputation, chews it up then spits it out with more venom, as it enhances their legacy as a truly brilliant yet underrated band.

Think about it for a moment; you are Nick Oliveri, a member of Kyuss the greatest stoner rock band ever, before going on to have even greater success with Queens of the Stone Age. Then you decide to form a side project in 1997, which produces a classic album in 'Cocaine Rodeo', but the band are still largely ignored because of what he’s done before. 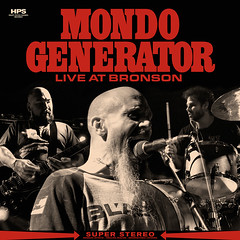 I’ve been fortunate to see Oliveri live several times, as part of QOTSA, Mondo Generator and Kyuss Lives, and every time I’ve walked away with a smile on my face as the music is just brilliant, and this live album encapsulates everything that Mondo Generator are about. The riffs are dirty and heavy, the vocals angry and throaty, the drums are noisy and fast, slow and rhythmic, but put together, they create a live album that is just amazing.

It’s the varied selection of songs that makes this live album exceptionally good, as it draws from all the bands that Oliveri has been in over the years. It begins with 'Nowhere Man' before they rip through a hyped up, angry version of '13 Floor'” the bass riff is just perfect and you can feel your body shaking. 'Up Against the Void' has a Bad Brains vibe to it and is a particular favourite of mine, as I love the aggressiveness of it, before the super powered spiky riffs of 'Shawnette Jackson' deliver a masterclass that only this band can perform. The two Mikes, Pygmie on guitars and Amster on drums, help fuel the raging internal fire of Oliveri, and show their own brilliant musicianship with two rip snorting covers of classic Kyuss songs 'Green Machine' and 'Allen’s Wrench'.

Mondo Generator are quite simply a band who can do whatever the hell they want, whenever they want, and they’ll probably do it better than most other bands on the planet.