Underrated by many in the metal scene, Flotsam & Jetsam are in the richest vein of form in their 35-year career. 2016’s self-titled was a massive improvement on 2012’s ‘Ugly Noise’ before they shook the world once more with 2019’s massive ‘The End of Chaos’. It was a huge ask as to whether Flots could pull off a repeat and one that the band questioned themselves.

Well, do not worry, because not only have the Flots matched that masterpiece, but they have shattered the ceiling with a career best record that simply oozes quality from start to finish. What’s apparent from the opening riffs is that this is a band on absolute fire. Every member of the band has summoned herculean type strength to lift the standard still higher. The melody that has always been a key part of their music remains intact, surging though the album, but there is an urgency, a power, sinews straining whilst retaining a grit that ensures these songs grab you by the throat … and don’t let go. 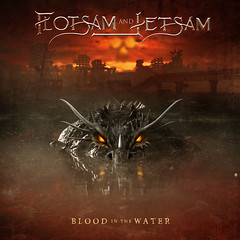 Guitarist Michael Gilbert has said that “We weren’t really sure what we had in the tank, as we put so much work, sweat, and blood into the Chaos album. As it turns out, we had plenty left to say”. He isn’t wrong. The raging title track which kicks off these 12 tracks, 55 minutes of classic metal is a definitive statement of intent. This a band that is taking the rage, the anger, and the frustration of the past 18 months, curling it all into a metaphorical metal fist and slamming it on the table. ‘Burn the Sky’ that follows is equally powerful. Just take a minute to listen to the hammer that Ken Mary is bringing from behind his kit, or the sweet dual guitars and the lacerating lead breaks that flow from Gilbert and co-guitarist Steve Conley. Elsewhere new member of the team Bill Bodily, no stranger to the band having toured with them in 2016 and 2019 is a steady anchor, unafraid to let those bass lines race back and for, maintaining the power but demonstrating that this is also an opportunity for a bit of freedom as well. And then you have possibly the best singer in metal today. Eric ‘AK’ Knutson. The man who has been at the helm since 1983 sounds better than ever. His range is massive, his vocals soaring yet retaining enough roar to keep the band vital.

One play through of this album is like that first pint in the pub after lockdown. Nowhere near enough and the only cure is to go again. Rarely do you get albums with absolutely no filler, but this is one of those albums where each song lingers long in the memory. The hooks are deep, the groove irresistible and whilst the thrash purists may argue through their keyboards as to whether this is true thrash or not, no-one else gives a toss. Just dive deep into the goodies on offer. ‘Brace for Impact’, ‘A Place to Die’ and ‘Walls’ are all fiery, aggressive, and yes, bangers! The latter possibly one of the most radio-friendly tracks for many a day and could be a breakthrough song, but it still arrives with every molar, canine, and incisor in place and nicely sharpened. It’s only when we arrive at ‘Cry For The Dead’ that the pace temporarily slows. It’s a track wrought with emotion; passionate and poignant in these times and rightly felt to be a Flotsam epic. But this is no power ballad, possessing a steely underbelly and plenty of fire.

The second half of the album is just as strong. Ken Mary’s drumming is unrelenting, a mesmerising, battering assault that powers the band towards that finish line. I marvelled at the sheer power of ‘Wicked Hour’, the intensity of ‘Dragon’, all muscular chops and AK delivering the goods in a manner those half his age can’t touch. An absolute beast of a track, the pace is unstoppable. I’ve heard critics say that Flotzilla is closer to power metal than thrash. It’s interesting as the band put no store in the label they wear, relying instead on phenomenal, face-melting music to do the talking. I don’t really care either. This is just good metal … delivered at full speed.

And just when you think, okay, a filler or two would be perfectly acceptable, we reach the final quarter of the record and there is no respite. The quality consistent, with the final song, ‘7 Seconds’ bringing it home in fine style, the band still going full pace. As Ken Mary said in our recent interview, the songs are so strong that they could be interchanged in the running order and no momentum would be lost. He’s so right.

‘Blood in The Water’ is magnificent from start to finish. It’s going to take something special to top this in 2021. Could it be the album to push Flotsam and Jetsam a couple of notches higher in the world of metal? It certainly deserves to. And in the meantime, I’m just going to pray to the gods of metal that the European tour planned with Accept and PCATBS goes ahead. UK dates would be even better but breaking across Europe for that bill … well, Boris hasn’t banned dreaming yet. Has he?