Having formed when Hang the Bastard split and featuring Joe and Angus – bass and guitar, respectively – with the recruitment of Richard Harris to the drum stool, the London-based trio set about creating even more devastating riffs than they had previous been responsible. Debut EP, The Mountain of Gold saw the light of day back in 2018 and, global pandemics not-withstanding, it has been an unfeasibly long wait for their first full-length.

The first question is whether the gap between the EP and the album has been worth the wait and that can be answered with a resounding: Yes. Urne have written a record that is simultaneously modern and traditional and unashamedly so.

Serpent and Spirit is almost like a magic mirror in that whatever you’re looking for you’ll be able to find reflected back at you. Whether you are a seeker of the dark or the light, of the ancient or the new, you will find it here. Envy the Dead features some very Sabbath-like doom and The Palace of Devils and Wolves is perhaps the most brazenly open track on the record in that it does not purport to be anything other than the delivery vehicle for some meaty riffage.

Yet, elsewhere on this journey, you’ll encounter landscapes both familiar and unfamiliar, as Urne act as though Virgil to lead you across epic plains and through dark forests. 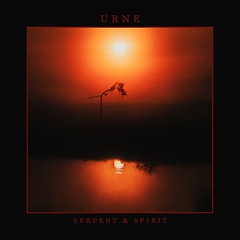 The title track is a voyage of discovery, commencing with an upbeat and positive feel until the guitars turn nasty and the raw, throat ripping vocals cast an altogether more sinister vibe. At just under ten minutes, Serpent and Spirit progresses through movements, from dragging its listener through some filth-ridden gutter to ascending on glorious wings. Moon & Sky has the progressive sludge feel of Mastodon and initially seems more restrained than much of the record. Its laconic pace and laid-back atmosphere hide the ferocity awaiting in the darkness until it’s too late and you find yourself staring directly into the heart of a damaged psyche.

Serpent and Spirit feels like a timeless album as it presses the old and new together like fusion. The instrumental Memorial is constructed from a mass of complex rhythms, widdly-widdly soloing and emotive musicality to create an utterly compelling piece. The not-related Memorial: Sing Me to Rest features a ghostly vocal and is as slow and deliberate as Nine Inch Nails’ Hurt as it evokes a vast and windswept vista.

Even though Tomb So Frail frenzied thrash riff is monumental, you cannot ignore the acoustic, folky opening which is so effective that it might actually justify the use of a drinking horn.

Urne’s debut is a triumph of creativity and in utilising such diverse aspects as sludge, hardcore, folk and even technical metal, they have managed to write a record that is both forward thinking and rooted in the past. Juxtaposing these diametrically opposing points could prove to be an unholy mess, but Serpent and Spirit’s creative juices are so tightly packed together that they have nowhere to go other than form as perfectly crafted musical structures.

Let’s just hope we won’t have to wait another three years for its follow-up.