I can remember the good old days of buying a VHS video from goodness knows where, for goodness knows how much and for goodness knows why. Popping in the cassette without an official certification and believing you're risky and edgy. Usually a splatter movie of some kind but other unsavoury feasts were also viewed. Everyone knew that the quality was going to be a little bit dubious but it was nothing more than good fun and something to tell your friends about at a later stage, if you didn't watch it with them of course. 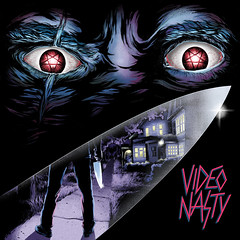 Listening to the aptly titled 'Video Nasty' first full length album gave me fleeting reminisces of that golden age of illegal videos. Literally video nasties were available from the dodgy bloke down the pub, but this record came rattling into my inbox from more respectable sources. The music on here is like a splatter movie in itself. It throws out different styles left right and centre. Hardcore, thrash, punk, blast-beats in the death metal variety and we're not even halfway through. More choice than a liquorice all-sorts help yourself buffet. Plenty of nods to old school punk and early Slayer riffs.

The imagery is all wrapped up in 80’s American horror and there are snippets from various horror films along the way to bind all the songs together. The chaos runs right through these 7 tracks from the schizophrenic and punkish 'Nightmare Beach' through the fast 'Castle Freak'. We slow down a bit with 'Pieces' before some absolute filthy double bass drumming on the 'Final Exam'. And with any good movie we always get a few hidden Easter eggs. A tip of the hat to the Godfather of gore, Alice Cooper, and right at the end of the album a song called 'Antichrist' appears. My hope beyond hope was that we get a cover version of the early Slayer song. I can assure you we don't get a cover version but just wait for the final five seconds.

This really didn't take long to listen to and I implore anyone who is into extreme music to give this a good going over.