The name Fimir took my eye when I was scanning down the list of new releases. You see the reason that they jumped out at me is because Fimir are a type of monster encountered in the Warhammer Fantasy Roleplay (WFRP) game, a game I am very fond of, having discovered it in the late 80's. Unlike most "monsters" from fantasy games, which usually have their origins from the works of Tolkien or reworked from D&D, the Fimir were especially invented as a creature exclusive to WFRP, as an unique selling point, with origins steeped in Irish mythology. 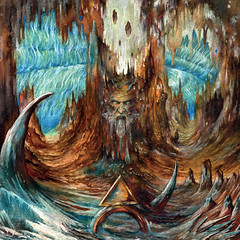 This name might be a coincidence, but the Fimir from WFRP are barrel chested, cyclopean, part-daemons and dwell in mists and fog. Now the fact that Fimir opens their debut album with a track called 'One Eyed Beast' I think that there might be more to it than just coincidence. Said opener is a bit of a beast itself, starting with the always ominous church bells, the track builds with a pulsing bass-line before the decidedly fuzz distorted guitars kick in, with an almost laid back, proggy riff.  The magnificently named Magnus Corvus (vocals and guitar) has a distinctive, unique, powerful voice, and there is a very strong instrumental section with a beautifully constructed solo. 'Horde of Crows' is a bit faster and there's the addition of some harsher blackened vocals, which are possibly provided by bassist H. Warlock. Lyrically, I think this again points to the WFRP connection, with mentions of mists, and dragons. 'White Wolf' is suitably epic sounding, with battle horns and a slower more grandiose build up, the main body of the track is more upbeat with a nice transition at the midpoint. 'Obsidian Giant' is slower, with a bass driven verse sitting nicely beside more guitar driven sections, to give a pleasing dynamic. 'Temple of Madness' is an older track and it has a really cool middle section, almost a bit like The Doors in places, and really does have the feel of slow, oppressive insanity. Finishing the album is the suitably space-like funeral of 'Mausoleum Craft' a wonderfully epic and meandering song, as befits a spaceship wandering lost and dead amongst the stars.

This is a pleasingly heavy album, its roots are firmly embedded in the 70's, but with a contemporary edge to it, to make it modern and viable. The production is clear and heavy, with plenty of definition, yet still organic enough to let the songs breathe. Fans of doom, with a slight stoner influence would do well to check out 'Tomb of God', it's heavy but with a good grasp of melody and song craft. This is a very solid album, and a powerful debut.