Sometimes you must simply shake your head, clap your hands, and say, “you’ve got me”. Such is the case with the debut E.P. from Tokyo outfit Mariner. Apparently, Mariner are a sci-Fi death/thrash metal outfit whose details are relatively sparse on the internet. They have an entry in the halls of Metal Archives but there isn’t much detail. Going in blind is not my favoured approach but it was my only option here. I don’t like surprises! 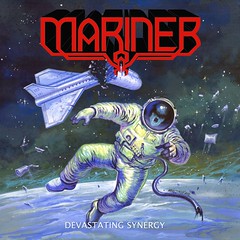 The first track is called ‘Proclamation’ and it’s a twisted, wacky and crazy joy ride in an out-of-control vehicle. There are definitely no brakes available on this runaway streetcar. Random and uncontrolled changes of tempo, maniacal vocals which at times are deranged roar out of the speakers. The progressive elements which cut deep are evident, such is the intensity and bizarre time changes. This is a band who have thrown caution to the wind, and are intent on developing in a carefree, almost jazz fusion style, expect the sax has been replaced by screaming guitars that rage over a thick riff and some entertaining melody. The more you listen to it the more you warm to the madness raging in your ears.

There is ample technicality layered within this E.P. You just need to work hard to find it.

The other track, the strangely titled ‘A You Eclipse’ wastes little time in diving into more angular and jarring rhythms and time signatures. It’s all a little Obscura gone slightly astray but underneath the jagged and rather exaggerated movements there lies something potentially exciting. The clean lead breaks are compelling, bringing melody and emotion. It’s an intriguing listen, spoilt slightly by an ungainly fade. Released initially on cassette and on streaming channels, Mariner are clearly intent on forging their own pathway. Good luck to them. I have no idea where this will go.