Innovative, genre defining, inventive. Certainly, a band that divided opinions. San Francisco’s Mordred’s blend of groove, funk and thrash caused a huge stir in the metal community. Their Debut ‘Fool’s Game’ is widely regarded as a classic, whilst the following two albums, ‘In This Life’ and ‘The Next Room’ both earned kudos, albeit the latter didn’t reach anything like the heights of the previous two records.

Having split in 1995, the band reformed in 2013 but ‘The Dark Parade’ is their first album for over 25 years. Whilst I’m not the band’s biggest fan by any stretch, (the cover of ‘Fool’s Game’ always freaked me out to be honest!), ‘The Dark Parade’ is a stellar record. 39 minutes of carefully crafted music which in traditional Mordred style brings the heavy in a manner completely outside of any other band.

We’re all familiar with ‘Demonic #7’, the first single to be released from the album a few months ago but what an earworm. From the atmospheric intro which builds the tension, the initial crushing riff, the spine-chilling scream, and DJ Pause’s early swivels on the turntable, this is classy stuff. It rips along with Scott Holderby’s unassuming but distinctive vocals starting the story lines. ‘Malignancy’ follows, another of the early releases, and another absolute corker. Punchy, punk-infused riffing, the frenetic pace paused by the melodic choruses before the breakdown which allows DJ Pause to get those tables spinning. A searing solo carves a pleasing reminder that underneath this contorted confusion of styles lurks a vibrant, thrashing beast. 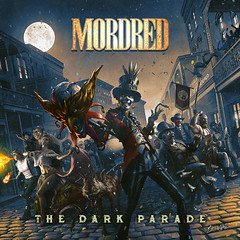 ‘I Am Charlie’ sees Mordred tackle terrorism in a mature balanced manner. They have never been afraid of taking on subjects which others may stray away from. I’ll leave you to take your own message from the song; it’s another fast-paced track, dominated by the battering snare of Jeff Gomes and the dual guitar work that surge throughout. The chanting “Nous Sommes Charlie” at the end lingers long – if it doesn’t trigger some reaction inside then I’d worry. By contrast, the smoulderingly sinister ‘Dragging for Bodies’ brings more variety and sublime interplay, with Holderby in majestic form. It’s one of the finest tracks here, with its Faith No More leanings and subtle delivery refusing to shed a metal veneer that shimmers and shines.

It gets even better with the title track. An absolute carnival of musical celebration wrapped up in under seven minutes, led by Holderby the ringmaster. There are shades of Mustaine in his phrasing and mannerisms at times, but his commanding performance, ably supported by various brass instruments that dip in and out whilst the groove dances underneath. It’s a track that threatens to explode at every dip and curve. It’s a majestic, organic, spellbinding song and one that sums up the genius of this unique band. By now, this should be fully burrowing under the skin, as thoughts turn to the next play when it finishes.

But we aren’t finished yet, not by a long way as the funked-up groove of ‘All Eyes on the Prize’ gets things moving once more. It’s addictive, infectious and just deliciously enjoyable. How you could fail to be moved by such a beat is beyond me. It’s musical heroin. Penultimate song ‘Dented Lives’ takes a bit more work, the slight grunge feel more diverse than expected but still working its magic before the Southern bluesy intro leads to ‘Smash Goes The Bottle’, which sees the band go full Thin Lizzy which is alright with me. It’s got a swagger which shows a confidence that may have not been so prominent in those earlier days, but which is well deserved and warranted on this album.

‘The Dark Parade’ is an album that demands repeated listens. It’s full of hooks yet has a steely backbone which ensures that the roots of the band continue. I’d advise getting stuck into this as soon as you can. It’s a musical masterpiece in yet another year where metal continues to thrill with the quality of releases.