Album Review: Incinerate – Back to Reality
Reviewed by Neil Bolton

This is the second full length release from Belgium based thrash/death old school metal trio Incinerate which follows the well received 2017 brutal release 'Amazon Violence'. Lovers of that album will be hoping for a similar sound; as that album was dripping in that beloved old school sound and displayed aggression and precision.

Their new one 'Back to Reality' thankfully has lost none of this power, in fact they have sent their sound down to the gym as its a little beefier too. 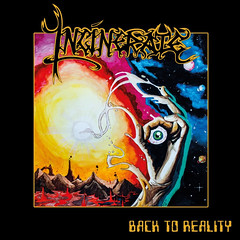 The title track is our starting point and does carry the same plus points of its predecessor. The thrash element bounces along well, and mixes well with the death metal element also. The all important vocal sound is in safe hands complementing the metal blast in your ears. 'Human Demise Ritual' begins and a more rounded thrash sound bares it teeth here. There is still a death tinge to this track, but the idea of a rapidly spinning, grinning, circle pit can be conjured up in the imagination easily.

A similar feel is present in the third number 'Internal Distress' and is far from outstaying its welcome. There is a very pleasant thrash section before the guitar solo that bounces along until the brutality begins once more. The vocal "ough"'s fit nicely and the speedier music reappears with 'Reprisal' - fast and tight, oh yes this band do thrash well.

The aural component of this band does not take over like it can in many death style crossovers, as the band are often left to shine and carry the song to where ever the musicians wish to take it. 'Synthetic Blood Plasma Bath' is an excellent example of this fact. The band thrash this tune out well and establish its power and intent long before the vocals kick in, and when they do you are not sorry.

The capability of this band as a whole is a big take away from this album. Hooks are prevalent, some choruses can be sung along to, and the brutal sections are as hard punishing as many of their peers.