The return to live music, and particularly thrash metal, which began in a field in Derbyshire and the fantastic Bloodstock weekend, moved to another iconic venue. The Underworld in Camden on a Saturday night and a lineup of British thrash is exactly what the Bank Holiday weekend needed, and did not disappoint.

An early start for the first band on, the experimental Svet Kant. Now there is no doubt that the three members of the band are skilled musicians, but their eclectic style often felt like three solos - drums, guitar and bass - vying for attention. They lost their second guitarist recently and they really were missing that element to tie everything else together. They also weren’t a great fit on a thrash lineup however their performance was interesting and a good start to the evening. 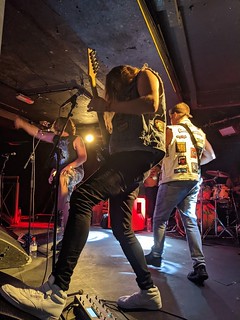 This was Tempashot’s first ever gig together, and boy did they smash it. With a healthy crowd ready to thrash, the Londoners provided riffs for days. A band with a growing reputation, their excellent first official single ‘Gunning for Gatekeepers’ was a highlight on 2021’s outstanding charity CD ‘Moshin’ The Roof On Volume 2’. Unfortunately their set was cut short due to a curfew and an earlier overrun, and this track was dropped. However Tempashot surely provided the enthusiastic crowd with a glimpse of their potential, both on record and on stage. The amazing set of ‘First Strike’, ‘Afterburner’, ‘Certified Dangerous’ and ‘The Witch’ makes their upcoming album ‘Certified Dangerous’ a must have for all thrash fans.

London’s Bangover were a band on the up going into 2020. A series of superb gigs on the back of the excellent debut album ‘Shovel Butcher’ had cemented them as players on the British thrash scene. Like so many others, the pandemic stalled their progress, so it was so good to see them back on the big stage at the Underworld blasting their fun, dynamic brand of metal into the Camden night. Tracks like ‘Palindrome’ and ‘Grand Moff Tarkin’ had the crowd chanting along and provided a fantastic place setting for the main event. Another band with more new music due soon, with an E.P. expected later in 2021.

Fresh off their barnstorming performance on the main stage at Bloodstock a couple of weeks ago (despite the technical issues), Acid Reign were severely affected by the pandemic. They produced one of the albums of 2019 in ‘The Age of Entitlement’ and were primed to tour it during 2020, when the lockdowns began. Finally out from the shackles, they did not disappoint.

Opening with #newagenarcissist, it was clear immediately that the band was on form and ready to put in a classic thrash performance. Howard ‘H’ Smith was at his snarling best and obviously having a blast, joining the mosh pit on more than one occasion. The guitar partnership from Cooky and Paul Chanter rained the riffs and solos down on the crowd all night and the ever spectacular rhythm section of Pete Dee and Marc Jackson pounded the Underworld into submission. 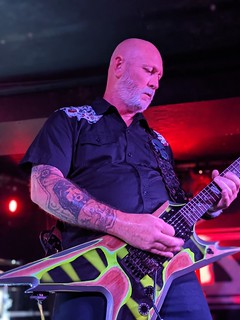 Classics ‘Goddess’ and ‘Life In Forms’ follow before ‘The New Low’ really gets the pit moving. This was a night in which the band skilfully mixed old school tracks from the bands 80’s/90’s output such as ‘The Fear’, ‘Creative Restraint’ and ‘Humanoia’ with their new tracks ‘Within The Woods’ and ‘Hardship’. The crowd reactions throughout the night were marvellous and it was great to see that it was the new ‘Within The Woods’ that elicits one of the most fervent.

They ended the main set with two old classics. ‘Blind Aggression’ gets the audience participation warmed up before the chants hit fever pitch for the Psycho-themed ‘Motherly Love’.

Eschewing the normal departure from the stage, the encore follows straight on and is made up of two of the faster tracks from ‘The Age of Entitlement’ in ‘United Hates’ and ‘Ripped Apart’. A great way to close the evening.

A masterful performance from Acid Reign and a night for us thrashers to remember with fantastic sets from Tempashot and Bangover. British thrash is in a good place and hopefully ready to move forward as the unlocking continues and gigs get going again.