In recent years Gurt have been at the forefront of the UK Sludge metal movement. Through a steady flow of critically acclaimed albums, stunning live performances and the best range of merch produced by any band, ever, they have built a huge following.

This September see’s them return to the battlefield with their latest offering, the fantastically titled ‘Bongs of Praise’.

The album opens with ‘Dr Strangeleaf’ which has an unexpected flute intro. Just as the listener starts wondering what the hell is going on that heavy Gurt guitar tone kicks in and you know everything is all right. The two minute instrumental opening features wonderfully spliced samples narrating the theme of the album to come.

‘Weed it and Weep’ shows us just why Gurt are at the forefront of the U.K. sludge movement. Those down and dirty guitars, a hint of blues but with far more aggression and Gareth’s vocal girth give Gurt the sound we know and love. 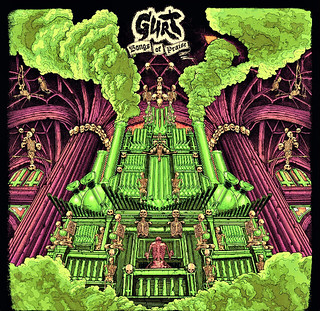 The album as a whole is a progression from the bands previous efforts. It shows development in song writing, performance and musical structure. This is still the brutal Gurt we know and love but ‘Bongs of Praise’ as a whole takes it to a new level. ‘Rolling Stoned’ has a rolling riff (no pun intended) that sucks you in, but the song writing is more experimental and the results are a winner.

The album has many expansive, almost progressive and certainly experimental elements. ‘One Hit Wonder’ and ‘The Joint of No Return’ are perfect examples of this. The former’s majestic bass intro and dark heavy feel alongside the latter with it trip inducing up beat undercurrent before the darkness decends.

Throughout the whole album Gurt have pushed the boundaries of what we know as sludge. They’ve taken their sound to the next level and produced a contender for album of the year!

Gurt's new album 'Bongs of Praise' is out September 6th through When Planets Collide.