If you haven’t heard of Florence Black before, where have you been? The Welsh rockers have been working hard on the scene for years now and critically acclaimed performances at the likes of Bloodstock and Steelhouse Festival’s have upped their worth considerably.

Does the name sound familiar, but you can’t put your finger on where from? They are that band that does a better cover of Budgie’s Breadfan than Metallica! Trust me, you need to hear it to believe it!

Live performances aside, it is only in September of 2021 that the band release their debut full length album! ‘Weight of the World’ gets it’s release on September 17th and this is one straight into album of the year contention!

Kicking off with the catchy ‘Zulu’, after the atmosphere building intro the listener immediately gets struck by a wall of sound, Florence Black are here and in your face. What jumps out is the sheer volume, the band have a produced a song which sounds absolutely HUGE!

Whilst classifying themselves as rock the band teeter on the edge of metal at many points during this record. ‘Inside Out’ highlights this, the sound more ferocious, angrier, vicious! ‘On The Ropes’ steps it up more so, as the pace quickens Tristan Thomas’ vocals start to melt your face, such is power he channels into that vocal performance. 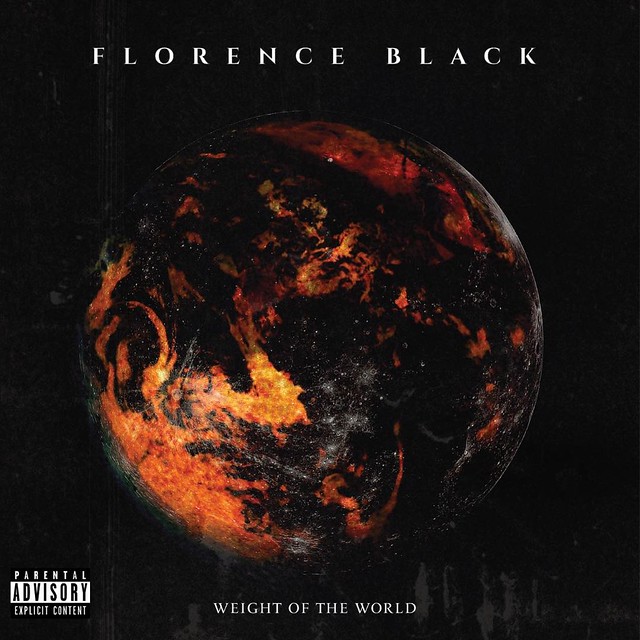 But it’s not all out rock and metal on this album, ‘Sun & Moon’ and ‘Groove Street’ may catch the listener off guard. The pace drops, a guitar kicks in that would not be out of place on a Fleetwood Mac record. Thomas’ vocals sooth, unlike the tracks before them. A warming tune builds in tempo sucking the listener in to the point of no return just as they hit that crescendo, before reverting back to a Lyndsey Buckingham-esq verse.

Throughout the album the boys mix style and substance keeping you on the edge of the seat, not knowing which way they are about to turn. Will your face get melted off, will you bang your head in time to a fist pumping anthem or can you lose yourself in a softer ballad? ‘Weight of the World’ has it all.

What stands out is the production, left in the hands of the legendary Romesh Dodangoda (Bring Me The Horizon, Motorhead, Sylosis, Holding Absence). The Florence Black many of us know and love is front and centre on this album, it does not disappoint! But Romesh has added volume, power and ferocity to the bands sound. From the off there is no holding back you cannot do anything but be fully engulfed in the sound.

There is really no better way Florence Black could have announced themselves on the scene than with ‘Weight Of The World’. The true definition of the term “All killer, no filler”!

Check out our interview with frontman Tristan here.