There’s no doubting the technical excellence of guitarist Mark Tremonti. He’s certainly one of the most impressive and gifted players in the hard rock and metal world today. He’s also no young whipper snapper anymore, having first founded Creed over quarter of a century ago. It’s his tenure with Alter Bridge, and the partnership with Myles Kennedy, Brian Marshall and Scott Philips which has provided more kudos, and the hard rock arena sound has led to Alter Bridge being on the cusp of headlining festivals as big as Download. Alongside Alter Bridge, Tremonti has also produced four separate albums with the band which bears his surname. The most recent release was 2018’s ‘A Dying Machine’, and whilst Tremonti’s vocals are similar in many ways to Kennedy, there is no doubt that his side project has more crunch and riff per pound than Alter Bridge.

‘Marching in Time’ opens with a fat riff, a ferocity of pace that gets the head banging before braking sharply into the first verse. The bass pounds and the track soon gets back into semi-thrash territory. Of course, Tremonti’s clean vocals and his love of melody ensure that this doesn’t explode into any kind of metal fest, but he does bring a heaviness to his music that is welcome, easy to listen to and hooks quickly. There are plenty of those damned earworms on this album.

Unlike ‘A Dying Machine’ which took the shape of a concept album, Marching in Time is more a collection of solid riff-driven tracks, all of which are stamped with the typical Tremonti flavour. A reflective look at the world today, there is reflection on the past 18 months. ‘If Not for You’ brings an altogether different approach and sound, but retains the solidity that Tremonti has established, whilst the title song brings the personal and emotional side of his life, based on a father who ha a child during the pandemic; something that happened to him in recent months. 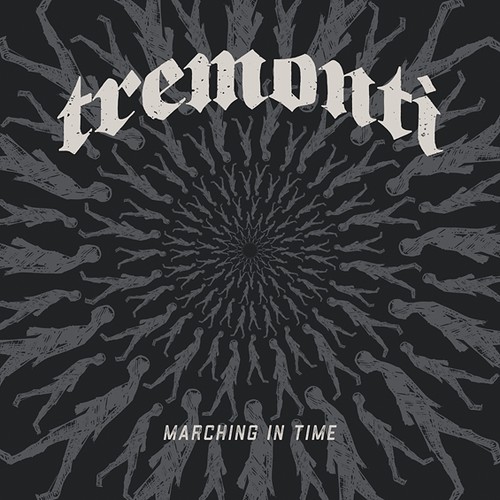 If you’ve followed Tremonti for any part of his career, you’ll know that this is a guitarist who appreciates the big riff. Check out ‘Thrown Away’, with its big boot stomp and pummelling drumming. Of course, there will always be a couple of gentler songs, such as ‘The Last One of Us’, which brings a softer, more pensive dimension. And if you want something heavy, then get involved with ‘In One Piece’, a rigorous and impressive slab of driving hard rock that will be difficult not to shake the head when listening to.

It’s as polished as ever, with the production once more handled by long-time friend and collaborator Michael "Elvis" Baskette, whose been on board since 2007. ‘Marching In Time’ is a vibrant, powerful record which demonstrates not only the guitar excellence of Tremonti, or the power of his skilful band, but his ability to write a song that lingers long in the memory. Album number five it may be, but there’s a freshness here, and that is welcome from start to finish.