It’s been a long time coming. Far too long. But at last, the debut four-track EP from Rites to Ruin has arrived and it’s as glorious 20 minutes of music as you’ll hear all year. Formed in 2019 and running into the lockdown sandbank in the Covid sea along with every other group in the world in 2020, the feisty quintet with the ear for the metal melody regrouped, refocused, and got their heads down. They’d teased us last year with their first single ‘Santanico’, played a fabulous taster live stream from the CapsaArx Studios in October and maintained the tension with subtle social media teasers before recently launching their pre-sales campaign for ‘Fire’.

Rites to Ruin have paced it right. ‘Forsaken’ is the correct opener. It’s a belter, with a driving riff, and a splendid pace. A perfect combination of muscular guitars (Matt Chambers and Lee Cartner), Paul Boschen’s pumping bass and the precision hammering of drummer Tom Ross all lock in tightly, allowing the Welsh Wonder Woman Krissie Kirby to reintroduce the voice that thrilled South Wales and beyond for over a decade. Yes, the former voice of Triaxis has lost none of the quality or power. If anything, her voice sounds even better, benefiting from that period of rest.

Rites to Ruin are fresh, invigorated and revitalised. The EP is underpinned by sweet vocal harmonies, thrilling dual guitar work which brings emphasis to the melodies without ever losing the heavy edge that is already a trademark of the band’s sound. It may be melodic, but the steel in the spine is Sheffield quality.

The dark and brooding ‘Santanico’ was the band’s first release. The distorted intro allows the song to creep out of the shadows before slapping you hard across the face. A brooding beast, ‘Santanico’ unleashes a middle section which swells the heart of any heavy metal fan, it’s that good. And just as you are nodding along and getting fully involved, the sudden and unexpected end hits you. 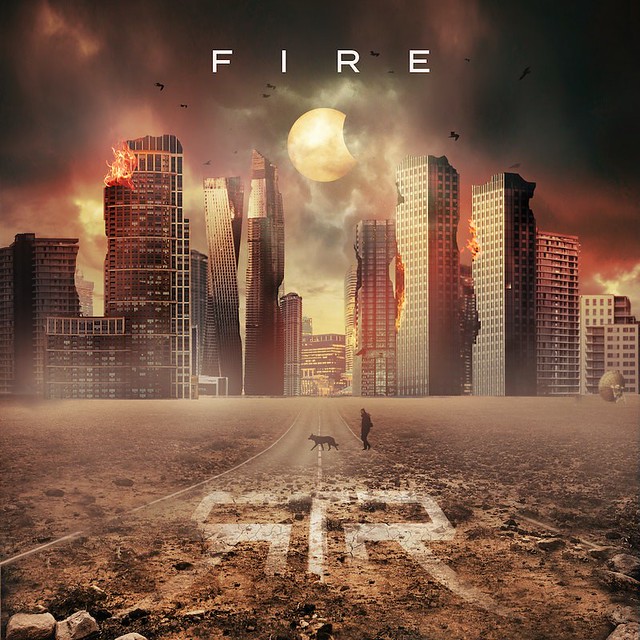 As the intro to ‘Rise’ begins, you may feel that the inevitable ‘slow paced one’ is about to arrive. There’s a brief opportunity to listen to that fantastic voice whilst all around her the tension builds, but these are only seconds because the track explodes into life, and for the next five minutes casts a magical spell on the listener. Containing hints of Eastern promise, ‘Rise’ is both new and yet familiar. The elements of bands such as Dio, Iron Maiden and Queensryche are evident in the construction and dramatic delivery. It’s a majestic and hugely impressive song which leads to the finale and the title track, ‘Fire’. All seven minutes of it, it’s an epic song that regally sprawls, retaining a sense of urgency and showcasing all that is good about the band. The dramatic dip in pace at the 3:40 mark doesn’t lose one iota of atmosphere and the climb to the song’s crescendo is breath taking. It’s fantastic to hear a band in total harmony, cohesive and in synch, and with a solid production (Ian GT Davies - Onslaught, Endeavour – take a bow), the only disappointment with this EP is the fact that it finishes so soon. With the promise of live shows and the band hard at work with new songs, Rites to Ruin have indeed walked through the ‘Fire’. This EP is hopefully just the beginning.