Album Review: The O'Reillys and the Paddyhats - In Strange Waters
Reviewed by Dan Barnes

In Strange Waters sees Irish folk / punk band The O’Reillys & The Paddyhats – henceforth referred to as The Paddyhats, for the sake of brevity – revisiting their existing albums and re-recording tracks in a variety of musical styles. All of this in celebration of the decade since the brothers, Sean and Dwight O’Reilly relocated and transformed from being a duo into a full-fledged band.

And where was this? I hear you ask. Dublin? Cork? Limerick?

No, it was Gevelsberg, in the North Rhine region of Germany.

Although not a place normal associated with Irish folk music and tales of the old country, of the famine, of migration and the Troubles, but The Paddyhats are the real deal so when they crank out tunes heavily coloured by the sounds of the fiddle, the flute or the accordion, their geographical origin is of little importance.

The songs chosen for re-crafting have been fairly split across the band’s recording career, but with the debut, Seven Hearts One Soul providing the most. Both Barrels of Whiskey and Fair Old Lady maintain their Irish roots but mix in a large measure of Country to the former and the latter imbued with the spirit of Enya’s Orinoco Flow.

What would probably be of most interest on the record is the re-recording of We All Know, an unassuming track in its original format, that does feature a more aggressive vocal performance and an upped tempo but takes on an entirely new visage when converted into a fist-pumping slice of Power Metal. Remember that The Paddyhats are German, so blasting out big and cheesy riffs with anthemic choruses (or is that chori?) is written into their very DNA. So, just as I explained / apologised when Mrs B was drunk-dancing at a wedding: “You can take the girl out of Chorley…” The Paddyhats are evolutionarily predisposed to Heavy Metal. Not willing to go about it in a half-arsed way, the band recruit the Queen of Metal herself, Ms Dorothee Pesch, to lend her instantly recognisable pipes to the proceedings. 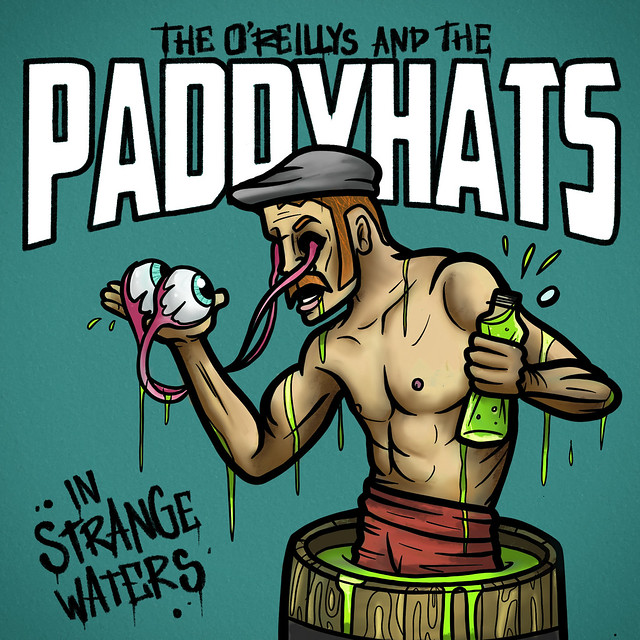 The title track to the latest album, Dogs on the Leash, is given a more folky twist and feels somewhat softened musically which still maintaining the bite of the original, whereas Ferryman is represented as a ska-punk number, complete with a skanking chorus to get you up and moving. Strange as it may sound, when comparing Beautiful Fear from In Strange Waters with the recording on Dogs on the Leash, the new Barbershop style rendition doesn’t sound as much of an anomaly as you may think.

The Paddyhats have managed to celebrate their first decade with this experiment without throwing the baby out with the bathwater. The three songs from Green Blood are probably the closest to their original ethos and, although Irish Way wears something of an Ed Sheeran mask, it does so without bringing the Sign of the Fighter version into disrepute.

Despite not hailing from the old country, The Paddyhats display their Irish hearts prominently and proudly on their collective sleeves and, on In Strange Waters, they have resisted the temptation to abandon that core principle. Even though they incorporate other genres into the sound, their foundation is firmly set in the soil of traditional Celtic folk/ punk and do not move too far away from tin whistles, banjos and harps.

The Paddyhats are probably closer in musical style to The Pogues, The Levellers or New Model Army than the Dropkicks or Flogging Molly, but that has not stopped them tearing up Wacken a time or two. So, why not pretend it’s Paddy’s Night, grab a Guiness or two and enjoy the craic.