Album Review: Trivium - In The Court Of The Dragon
Reviewed by Tim Finch

It seems like only yesterday I was listening to and reviewing Trivium’s last album ‘What The Dead Men Say’, and on checking that fact,it was just over a year ago, at the start of this global pandemic, when the band released said album. In the past the British music press’s obsession with labelling the band “the next Metallica” only served to put listeners off rather than turn them on. Despite that ridiculous label, Trivium are anything but the next Metallica, in fact they have done so well forging their own path that should an uninitiated music fan listen to their back catalogue they could discover some true masterpieces.

Last years ‘What The Dead Men Say’ helped the band truly shake off past labelling and helped them stand out in our pandemic world with an album of the year contender. With said pandemic giving the band a lot of time on their hands we see a follow up release drop this week with latest album ‘In The Court Of The Dragon’ released via Roadrunner Records.

The album picks up where its predecessor left off. Opening intro ‘X’ a beautifully haunting one minute and twenty eight seconds, composed by none other than Ihsahn (Emperor) that kick starts the bands tenth album and creates an atmosphere for what is about to hit the listener.

Then we launch into title track ‘In The Court Of The Dragon’ which is a bruiser right from the off as Heafy screams in his familiar guttural style leaving you in no doubt what the next fifty minutes will bring… or so the listener thinks! 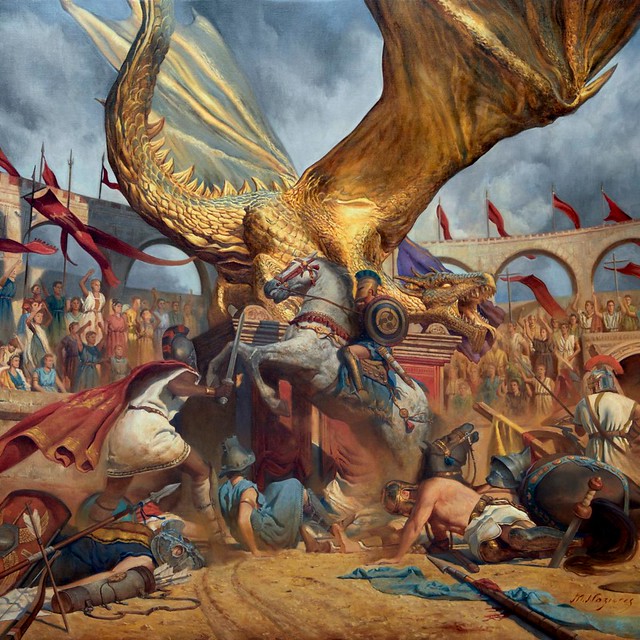 The album fluctuates between the insanely fast, brutally aggressive and sometimes more subtly mesmeric. Whilst the title track was a fast paced bruiser, ‘Like A Sword Over Damocles’ has a slower start, but soon the temperature and intensity rises leading to a wonderful mid song solo. ‘Feast of Fire’ adds elements of melody, albeit keeping the heaviness the band are renowned for, but opening avenues they haven’t often explored previously.

The rollercoaster ride this album takes the listener on continues, from the melodies of ‘Feast of Fire’ the listener is blasted at full speed through ‘A Crisis of Revelation’ before the breaks get hit and ‘The Shadow of the Abbattior’ calms the mood. Acoustic guitars initiate the calm, a softly spoken Heafy whispers his way through the track’s opening minute and thirty seconds before the intensity builds, but not for long.

Throughout the album, Trivium keep the listener on the edge of their seats, not knowing what will hit next. From face melting aggression through softer numbers and then the experimental elements that the band are starting to explore. Whilst ‘What The Dead Man Say’ established Trivium as a band out to rule the world in their own right, ‘In The Court of The Dragon’ allows the band to grow, develop and explore and whilst doing so taking the listener on an exciting assault of their senses.