Lancaster heavy metal stalwarts Eliminator’s debut full-length ‘Last Horizon’ saw the band build on the momentum which had been building for the previous seven years. Earning solid reviews, the band had toured the UK and Europe and looked set to capitalise on that response with their second album. Having hit the wall that every other band in the world also collided with, the band were able to regroup and with the support of the excellent Chris Fielding at Foel Studios, Eliminator now finally bring that second record in the shape of ‘Ancient Light’. As one would expect with Fielding at the helm, the production is crisp and polished, allowing Eliminator’s crunching classic heavy metal to punch through.

So far so good, but it is the curse of the heavy metal band that you live and die by your vocalist and for me, Danny Foster’s slight warbling high pitched delivery is Eliminator’s Achilles heel. Musically the band are tight, with the interplay on the opening track ‘Arrival’ impressive, with some fluid guitar work. But Foster’s vocals, whilst in keeping with the style of the band’s music, are just a little too ear-shattering.

One would hope that things might improve as the album progresses and the pace certainly rarely drops. Lead guitarist James MacMichael shreds for fun, and on ‘Silent Stone’ the tempo which is upper-level Maiden sees Foster hit top form. It’s nothing that hasn’t been done before, but then, we rarely get something truly ground-breaking these days. It’s a cross between traditional metal and the adrenaline fuelled power metal. 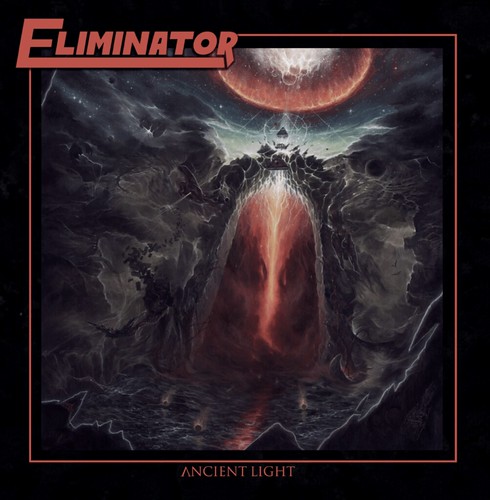 The rampaging anthemic title track is solid, whilst the thundering riff that opens ‘Goddess of Life’ is thick and rich. But once more, I struggle massively with the vocals and on this one, it’s noticeable how much they vary. It’s a real shame as the band are now in full flight but unfortunately the screams detract from some very robust heavy metal. This continues to be the pattern for the remainder of the release. Some of the songs are more grating than others. The explosive ‘Lord of Sleep, Dreamaster’ hits full throttle, the pace relentless, the soloing spectacular and if you can accept that the vocals then it’s a decent slab of heavy metal.

There are some rather weak tracks as well, with ‘The Library’ particularly a challenge to get through. I’m starting to sound like a broken record here but it’s the vocals once more that do the damage.

It’s disappointing to write a review that is critical and as always, I have much admiration for those who do play and write music. I am however, here to provide my opinion, and when so much quality is presented during a whole year, the cream really does rise to the top. This won’t happen for Eliminator, but I wish them well for this album. It just didn’t push any of my buttons.