So, Nocturnal Graves are the next band I’ll be checking out and honestly, they’re something of an enigma to me. I’ve been aware of these guys for a while but never gave them their due. Formed in 2004 from Melbourne, Australia the band, even prior to their debut album, were extremely prolific. In the span of three years they released 3 demos, 2 compilations, a split and an EP; that’s not bad going for a new band at all. But 2007 would at last see Nocturnal Graves drop their debut full length release: Satan’s Cross. However, it would be a few more years until their follow up owing to their breaking up around 2010 which, thankfully, was restored come 2012. Since then the band have established a pretty consistent string of releases that have solidified them in the consciousnesses of those who follow them. As their fourth full length album and one of the first semi-big releases of 2022, this album is assured to wake up those people who consider January to be a dull month. Let’s take a look at An Outlaw’s Stand.

The thing that really stands out to me regarding this record are the vocals. For a band that label themselves first and foremost as a death metal act, the vocals possess a particularly blackened aesthetic. They’re not this gruff and growling performance that is going to have you lodged into the back of your chair, they are this much more visceral and to the point delivery that will see you seated and scarred by the finely sharpened edges the vocals harness herein. They are almost like a go between of a death metal delivery and a black metal variant, belonging to neither of the two but perhaps serving as something that could open doors for people who may want something a little more aggressive and in their face. They are nicely audible however, they aren’t drowned out by the songwriting as can be the case for blackened vocals sometimes so the album mix really enables them to come across with all the piercing nature they throw at you here.

The songwriting also shares this blackened affair. If you listen closely you’ll find the riffs don’t possess any majorly blocky or segmented structure to their performance, the riffs and guitar work on the whole seems to possess a rather streamlined and collective identity whereby the riffs aren’t going to come at you in waves where you can discern what is coming next. The songwriting comes at you with the wish that you won’t know what’s coming next because the band have not chosen that segmented and chopped up kind of approach to riffs, there’s no chance of predicting what’s coming which makes it all the more exciting. Once a track starts there is very little to stop it, it’s this train that’s constantly gaining speed without any hope or sign of the brakes being activated. It makes for an album that feels utterly breakneck but it isn’t so without control we don’t know what’s going on; for all it’s intensity you’ll always be able to comprehend where you are amidst the songwriting and where you are being taken to. 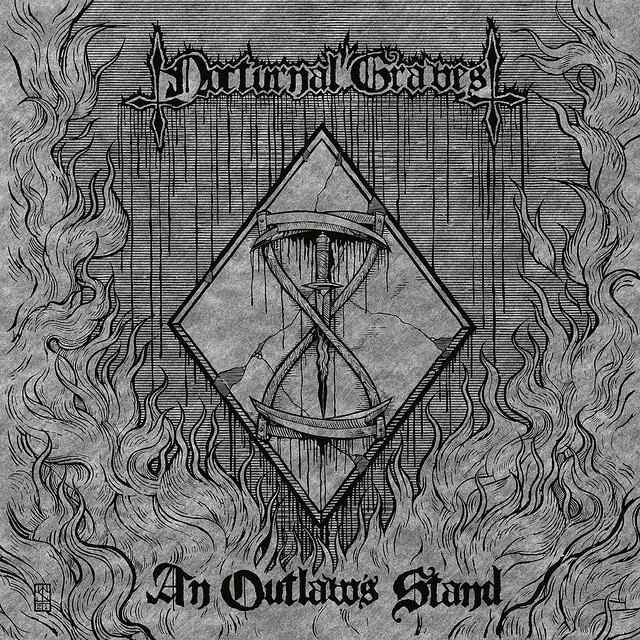 Considering how strong of a blackened aesthetic the album has, it’s weirdly nice to acknowledge how stripped back and rooted to the ground the drums are. Despite the intensity the primary vocal and riff performances give us you’d think the drums would be equally devastating, but it’s nice to hear the band have given us drum tracks which are much easier on us. There is only a meagre smattering of blast beats spread throughout the entirety of this record, as a result you’re not going to be thrown and kept into the back of your chair while the drums are performing. For the most part the drumming is remarkably tame, you’ll still be on the receiving end of the Tom-toms and bass drums that you’d want to hear from the drums on such an album however it’s nice to know we don’t need to contend with yet another visceral element from the band. Instrumentally they serve as a healthy backboard against the more crippling and piercing aspects of the record.

I will say though, that the band’s commitment to creating a frantic sounding nightmare has been pulled off rather well here. I’ve commented beforehand on how the band let nothing up from start to finish and there’s little sign throughout any track that they will attempt anything of the sort, however it can be easy for a band to just let the speed fly from them and thereby lose traction of what they’re trying to do. That’s never the case here. The band do not approach their songwriting with the blockier and more segmented style that death metal usually possesses, yet we’d be doing them poorly if we didn’t acknowledge how they regulate their speed in such a way that allows them to maintain such a slew of onslaught and visceral malice without their performance either coming across as excessive or losing ground. You always know where you are at any minute of this record even as the band throw flurries of blast beats, piercing riffs and the aforementioned vocals your way. An album like this can be very easily misdirected in such a way that it devolves to a speed fest without much substance. By taking the necessary measures, Nocturnal Graves have ensured that won’t be the case here.

In conclusion, I found this album to be the work of a deft touch. Owing to the aforementioned intensity of the band’s performance this could have been a speed-induced mess with little binding us closely to the record, but on the whole the band have succeeded in giving us an aggressive and in your face kind of album that manages to give us the sharper bladed sound black metal fans will appreciate all the while sporting the production and crushing weight any beloved follower of death metal would crave to have. The strength of this album derives from how it’s able to balance style with substance which I think it nails right on the money as you’ll be able to take one track of slaughter after another without feeling like you’re missing out on something merely by listening. Nocturnal Graves are a band I’ve never been all that familiar with and I’m glad I finally gave a record of theirs a listen. For those looking for a good middle ground sound, An Outlaw’s Stand is a quality gateway record into the more explosive and nightmarish world of extreme metal.