Album Review: Sepulchral - From Beyond The Burial Mound
Reviewed by Sam Jones

Prior to my listening of From Beyond The Burial Mound, I was starting to see this record everywhere. On social media, BangerTV, Youtube etc this album kept cropping up and inevitably I knew I would need to check this out for myself. Sepulchral formed in 2016 out of Bilbao, Spain and I believe its been some time since I checked out a Spanish death metal record. Since their inception, the band have released two Demos but also dropped a prominent EP in 2019 titled Graveyard Repugnance; now three years on the band finally unleash their first full length effort upon us. I went into this record excited; surely so many different places and formats wouldn’t talk so much about this album if it wasn’t good? This was my own personal journey to find out.

A heavy and prominent bass is found throughout the album. Not only is it nicely audible throughout the majority of the record, but it wonderfully reinforces the primary guitar work that is going to be the centre of our attention, granted this is an obvious usage of the bass but it’s the attitude the bass helps to exert that’s intrinsic here. I’ll be talking about the main guitar work soon, but the bass really does its part to give the record the meaty and clenched persona it exerts herein. It’s not merely a ripping death metal assault to be had, the bass is constantly injecting dirty and chunky sections into the underbelly of the album that seriously fatten and embolden the record’s texture. As a result, Sepulchral deliver a Swedish death metal-reminiscent record that doesn’t feel as raw and hollowed out as their contemporaries may otherwise offer us.

The soundscape is one that enables the band’s sound to flow freely and without all that much restraint. If you listen to what the record gives you, and not all that closely either, it’s pretty evident that the band didn’t want to box their sound into four walls and leave it at that. The entire album screams, quite literally. You’re able to feel these riffs drift into the nether, the vocals ring out in the endless black; it’s like discovering this band playing amidst a dark cave far below what we’d hear nearer the surface. The evil isn’t as strong as more cavernous bands would infer however the ambience and atmospheric presence is undeniably there. What’s more is how the band aren’t playing super fast either; had this been the case I don’t believe this immersion would be as complete, a faster pace would have minimised the impact the atmospheric elements would have on us here. The band’s choice of tempo enable the record to harness just enough of that echoing persona without the album coming off as hollowed out. 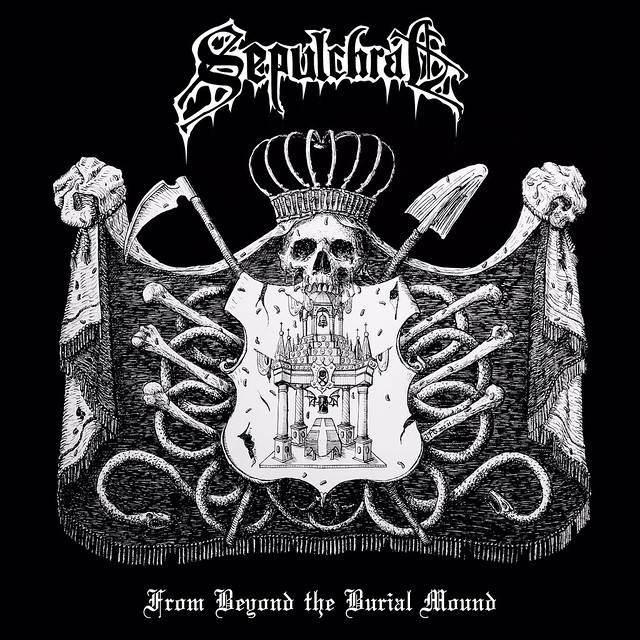 The way I’d describe Sepulchral’s approach to death metal is like someone has applied a slow-motion filter to a work of Swedish death metal. The grating and streamlined form of songwriting is present and it doesn’t take long to pick up on what style Sepulchral are fond of using, however the album sticks to its pacing guns very closely. The speed you receive at the beginning of the record will also be what you get at the end; but by doing so it allows the riffs and overall songwriting to come off with greater reality. By bringing the tempo down just a touch and enabling the guitar work to deliver a slightly more crunching tone, Sepulchral allow us to feel and sense the crushing vices that pin us down here. Even during some of the drums’ more rampant periods, the band rarely raise the intensity of their performance. I imagine some may criticise this when it drops as being too rigid amidst its tempo which understandably can result in a static and unmoving album yet, it also provides the band a unique opportunity to immerse their audience without having to implement tried and cliched approaches for conventional atmospheric work.

May I just say how addicting this record is? It possesses this rather curious aesthetic where we’ve got ten tracks and one introductory piece spread out over 40 minutes, the songwriting doesn’t move about too much from what we initially hear on our first listen, yet the album has this oddly warming and satisfying experience to it. Listening to this record and subsequently moving from one track to the next feels like we’re only continuing to dive deeper into Sepulchral’s possibilities for what they may unfurl for us. The songwriting may be pretty rudimentary and the band may not be reinventing the wheel, but it’s what they do with the limitations they’ve imposed on themselves that makes this such an appealing, straightforward listen. I’ve listened to other bands do the same as Sepulchral have done and yet, this band do not fall into that category of repetition and predictability in spite of everything the band otherwise demonstrate to us. Listening to this record is like already knowing how a story will end but Christ if they haven’t made the journey damned entertaining on the way there.

In conclusion, this may be seen as a very meat and potatoes death metal record. However, it’s a meat and potatoes death metal record done right; the songwriting isn’t wholly experimental nor do the band offer up much variety throughout the 40+ minute runtime and yet in spite of everything that would point to a lacklustre and narcoleptic experience, Sepulchral actually pull it off. This is a record that doesn’t need to do overly much because the songwriting and attitude is enough for us to become enthralled with what they can deliver. Never have ten tracks of near identical persona been so deliciously listenable. Going from one song to the next would have me relish with excitement, I knew I was going to get something pretty similar but I ultimately didn’t care because I was so on board with the band’s overall soundscape. I was completely immersed without the band explicitly focusing on such an effect. This was such an entertaining album that felt like it wasn’t trying too hard to do so, and for that reason I know I’ll be coming back to Sepulchral in the near future. Extremely easy to listen to, extremely easy to enjoy, this is one album to play and experience without any shred of difficulty.