Back in 2017 barbaric interplanetary warriors GWAR released ‘The Blood Of Gods’, it was a breath of fresh air in a stagnating scene and highlighted a return to form (not that GWAR were ever off form) for the band with their best album in twenty years. At the time, and even today, the political commentary that forms an under current for that album was on point if not prophetic. Five years and the collapse of the world via extreme right wing politics and a global pandemic later GWAR are back with ‘The New Dark Ages’.

The blurb for album states:

“Mankind’s time upon Earth is tracked by “the Ages”: The Stone Age, The Bronze Age, The Age of Enlightenment. Each period of history separated by a key point in time, when the fate of the human race has hung in the balance, perched upon the very precipice of Doom. We stand now at another of these critical moments, the beginning of a New Dark Age! Ancient and unspeakable terrors again plague the Earth, forces that threaten to bring an End to the Age of Man, once and for all.”

And so it seems GWAR are targeting prophetic political commentary once more, all guised under their science fiction inspired back story. 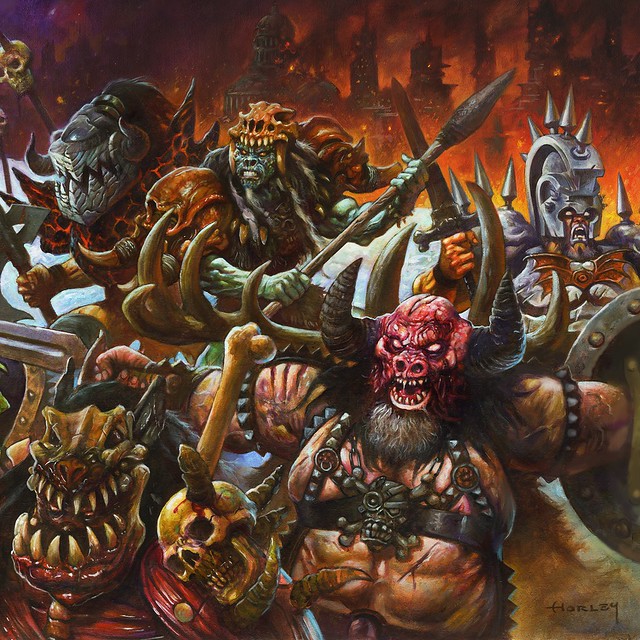 As the title track rumbles into view, a single bell chiming in the distant fog, the band create a dark atmosphere to begin their story. Once the murk has cleared, the song writing really does pick up where the aforementioned previous album left off.

Blothar continues on vocals having replaced the late Dave Brockie on the previous album, and his vocal range really encapsulates the raw hate the band has for the current state of the world. The songs are dark, heavy monstrosities much as we expect from the GWAR machine but Blothar introduces moments of melody in his vocal delivery, spliced between that traditional heavy riffing and Swedish Death Metal tinged melees.

Throughout the fifteen track opus GWAR meld their heavy stylings, with sci-fi inspired stories and real world problems to great effect. Whilst ‘Scumdogs of the Universe’ and ‘America Must Be Destroyed’, five years ago ‘The Blood of the Gods’ moved GWAR to the next level and thirty years into their career ‘The New Dark Ages’ takes them to their pinnacle.