It's been a moment since I checked out some thrash and so, here we have the second album from Canadian act Besieged. Formed in 2003 originally, the band hail from Winnipeg and released their first Demo in 2004; yet the band dropped off the face of the Earth and didn’t resurface until 2010 where they finally announced their debut studio album. But, again, once it dropped, the band soon effectively ceased to exist before they released a self-titled Single and, even then, that would be the last notation of the band for another seven years. That’s where we are now: twelve years following their first full length album, Besieged now prepare to give us their second full length release. I was curious after I saw the artwork for this record, what Besieged would deliver on, and so I decided to see what, after so long, they could deliver on.

This album certainly features an erratic and haphazard nature of songwriting. From the first moment the album plays for us, the band are really committed to subjecting their audience to a freakish and nightmarish form of riff playing, not within the context of a dark or brutal tone but rather one that isn’t concerned for whether we feel comfortable or not. If you listen closely the riffs possess this scraping essence as the riffs are being churned out so quickly between chords and solos and likewise. This scraping element lends the record a ruthless vibe that allows the band to play fast without needing to relentlessly double down on their aggression. The actual riff interplay and the way the band have applied their songwriting here is the aggression; one can imagine the band foaming at their mouths here as they seek to strive from beginning to end without care for what their audience thinks. In addition, the production is slightly compacted but at no point would I deem the record to propagate a string bass tone; as a result this record has a much more raw and down to earth feel to it.

It won’t be long before you pick up on how quickly the band play. You would think, with just seven tracks herein, the band may take a moment or two periodically to slow down to provide audiences with some diverse songwriting segments or to at least allow us to relax at some point. Yet that simply isn’t the case with this record, from the moment you start one track that’s it, you’re on the Go all the time. Besieged aren’t concerned with relaxing or taking it easy at any point, whether on themselves or us, the pedal is always down to the floor and we’re merely along for the ride. Due to the aforementioned way the riffs play and scrape along their way through this record, it only heightens the pacing this record races by us with. While there are no slower segments here, the band at least include some more pivotal and focused moments here and there that enable us to concentrate and appreciate the riffs all the more. There’s no fanfare latched onto the end of tracks either, no big blowout to give us something to remember them by. Tracks will end as rapidly as they start with no special emphasis on their impact. The band leave it up to us to determine how vehemently we have enjoyed this songwriting. 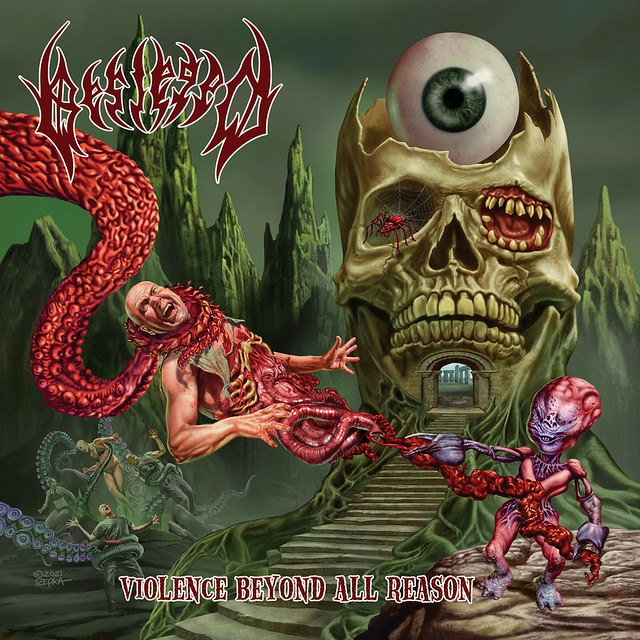 You may think that with a smaller pool of tracks for people to experience the band would have stretched one or two out but, that isn’t the case here. The furthest some tracks may elongate for is the 5 minute mark, aside from that the band stick to rather rudimentary track durations for where Thrash is concerned. This results in an album that not only plays fast where the songwriting revolves but also an album that feels fast because the band aren’t looking to overextend their welcome to any degree. It’s completely in line with their prerogative to not include anything overly fancy or over the top, their songwriting can affirm this facet. The band didn’t go into this record to utterly enthral us, they got in and played and then they decided to get out. By keeping the album brief, they’ve ensured fans who took to this record easily will be eager for the band to release more material or go back through Besieged’s catalogue.

The vocals, other than being the primary force the band utilise to project their strength aside from the instrumental elements, is arguably one of the most important aspects of this record. Since the band are projecting a raw variant of thrash that isn’t looking to be tied down to a baritone soundscape, the vocals are one of the few parts of the album that can actually infer that bass into the record. I think that had the vocals not been the form that we get on record, and had been something just slightly higher in pitch, this record would have sounded a little airy. The drums manage to deliver some bass here and there depending on what the songwriting consists of but, it’s the vocals more than anything that provides the clenched punch this record dearly required. The vocals aren’t even anything you haven’t heard before yet, in the sonic context of this record, the vocals are one of the strongest elements the band have harnessed.

In conclusion, this record pushes down that pedal to the floor and really refuses to ease the acceleration at any moment. From the opening seconds this album is looking to rave from start to finish and close things out without any major considerations for how it’s perceived. The band deliver nothing superfluously grandiose at any point nor do they give their album any climatic, final send off for their fans to remember this record by. It may be a cookie cutter thrash record but it’s the kind that the band have so deliberately crafted Violence Beyond All Reason to be; this record knows precisely what it is and therefore hasn’t lied to us at any point about what it’s looking to achieve. The album tells us plainly what it is through its songwriting and no nonsense approach to pacing and aggression. It’s actually a nice listen in this respect, to encounter a band that isn’t looking to instil anything monumental for a change and is, in fact, something mundane and matter of fact. This is all the more prevalent by how I’d be interested to see a future release by this band. Besieged may not have remade the wheel in their image but if the overarching design works and rolls then there’s nothing wrong with that at all. Fast, powerful and razor sharp, Violence Beyond All Reason is a record that’s tearing at the seams before the first track has even begun.