Album Review: Tygers of Pan Tang – The Wreck-Age/Burning In the Shade 1985-1987
Reviewed by Paul Hutchings

There are several reasons why Whitley Bay’s NWOBHM stalwarts Tygers of Pan Tang didn’t progress as one might have expected in those halcyon early 1980s. Losing John Sykes to Thin Lizzy and then Whitesnake didn’t help, although singer Jon Deverill was a superior vocalist to Jess Cox.

Having peaked with a top 40 hit with a cover of The Clovers ‘Love Potion No.9’ in 1982, the band collapsed shortly after. The line-up that emerged in 1985 for these albums moved to a much more radio friendly sound, with only Deverill and drummer Brian Dick remaining from the band who recorded ‘The Cage’, and who had flirted with success for a tantalising moment.

One listen to ‘The Wreck-age’ has you yearning for the grittier sound that the band generated in those early albums, be it the polished ‘Spellbound’ or the earlier grit of ‘Wild Cat.’ There are few memorable songs on these two releases. The title track does at least have a bit of gumption about it, ticking along at a decent pace, with some decent guitar work thanks to the duo of Neil Shepherd and Steve Lamb.

Elsewhere you must work hard to find anything that has any spirit to it, with most songs limper than a fortnight old lettuce. Tracks like ‘Women in Cages’ have not aged well in the slightest, with the chorus of “Women in Cages, Prison of rages, They don’t wanna be free, Women, driven with desire, frenzy of fire, they all wanna be free” a masterpiece of misogyny. 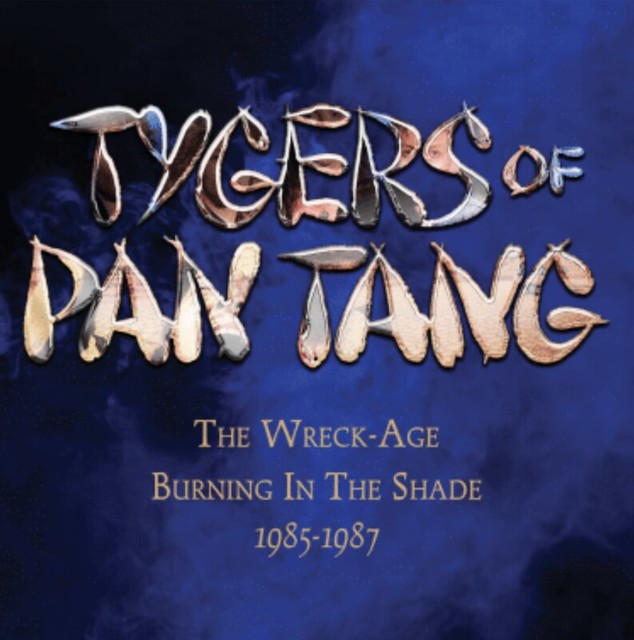 Ten tracks, with possibly two decent songs amongst them, ‘The Wreck-Age’ has not aged well. Deverill’s vocals are decent, but the songs are flaccid, there are some horrible 80s synths which add to a blunt edge to make it an AOR album that really needs to be left to rest in peace.

1987 saw the band release ‘Burning in the Shade.’ Far from burning, this album continued in the rather routine manner of’ The Wreck-Age,’ following more lightweight melodic rock. Having shed Shepherd and bassist Dave Donaldson, the trio of Deverill, Dick and Lamb collaborated with one of the originators of Neat Records, Steve Thompson who added keyboards and bass as well as co-writing credits on all tracks.

If ‘The Wreck-Age’ distanced the Tygers from those early albums, ‘Burning in the Shade’ took them about a million miles away. Deverill’s vocals remain strong, but the ghastly harmonies and backing vocals are stomach-churning, with the keyboards dominating at the expense of the guitar, something that turned many of their long-time fans away.

Looking back and listening to these songs today, one wonders if the band felt that this was the best route for commercial success. They attempted to move in the same way that bands such as Uriah Heep, Praying Mantis, Lionheart, and Magnum did. Both albums are totally inoffensive (if you ignore ‘Women in Cages’, ahem), but flat as a pancake with it.

This package also comes with a selection of demos from these albums.

Interestingly, since Robb Weir resurrected the band as sole original member in 2001, the band has moved to a much more guitar orientated sound and their recent albums and this year’s EP ‘A New Heartbeat’ are worth a listen.