With the sad cancellation of ManorFest late in the day, the team at The Razor’s Edge found themselves with a free weekend and so there was only one thing for it… it’s time for a road trip! Due to play at ManorFest were both Ten Ton Slug and Raging Speedhorn, and as luck would have it these two bands were also on the bill at Red Crust Festival in Edinburgh. So off to Scotland the team went to check out both those bands and a few more on top at the cracking La Belle Angele venue.

Due to the five hour travel time we sadly missed Earl of Hell on stage, but we recommend you check out their latest EP.

Second band on stage and the first we caught were Razor Sharp Death Blizzard, who meld the punk rock attitude of the Dead Kennedys with the stylings of an aggressive extreme metal band, not unlike Entombed. The resulting output is a blistering half hour of a battering ram. A suitable opener for tonight’s headliners, these Scottish lads get the crowd whipped into a frenzy, their political outrage from within the lyrics matched by flailing limbs in the pit.

Irish sludge masters Ten Ton Slug have come a long way from their first Bloodstock appearance many years ago. Their day on the New Blood stage opened many doors for them, and in this only their second gig of the year they blow away the cobwebs quickly. The guttural growls of Rónán O 'hArrachtáin ring out atop a Judas Priest influenced riff that is layered in a heaviness unlike any other. When ManorFest was originally cancelled, the thought of missing these boys was a real downer, so the chance to get to see them any way was a highlight of Red Crust Festival. As Sean Sullivans ferocious riff assault pummels the crowd we stand in awe of a band on the rise.

Main support for the opening evening of Red Crust Festival are local heros Dog Tired, a band I admit that had not crossed my path previously. The room is awash with Dog Tired t’s so it’s a safe bet the hometown crowd are going to love this one. Differing from the three bands that have come before them, these Scottish chaps add a chunk of groove to their weighty set. It’s Pantera, or at least how Pantera should sound if Kirk Windstein was their vocalist. With forty minutes to set the scene before the headliners take the stage, Dog Tired admirably take up the challenge with a barn stormer of a performance. This won’t be the last time the band crosses my path.

And so the time has come, Raging Fuckin’ Speedhorn are about to take to the stage, the most active band on the UK scene right now. We’ve lost track of how many times we’ve seen the boys this year, and with multiple more events scheduled in the next few weeks it won’t be the last either! There’s good reason to our Speedhorn affliction, they are just so damn good!

On this evening in Edinburgh they are on top of their game, probably the best show they’ve put on this year and nearly as good as their Bloodstock 2021 show stopping performance. As they roll out the modern-day classic ‘Doom Machine’ Dan and Frank take it in turns to whip up the crowd. Although it’s not until mid-set and ‘Knives and Faces’ where the fans in Edinburgh really got going as Frank announces “This is a song about getting shanked down the park”. The roaring rage filled ‘Spitfire’ highlights a set of modern Speedhorn classics, melding the original albums material with their latest with ease. The band have come a long way since 1999, and they’re not stopping yet. Long may the Speedhorn machine roll on!

As the crowd disperses we head over to Bannerman’s Bar across the road for the Red Crust Festival aftershow with the wonderful Goblinsmoker, we are left to ponder what would have been at ManorFest this weekend. Instead, the road trip continues with a stop in Glasgow next on the cards. 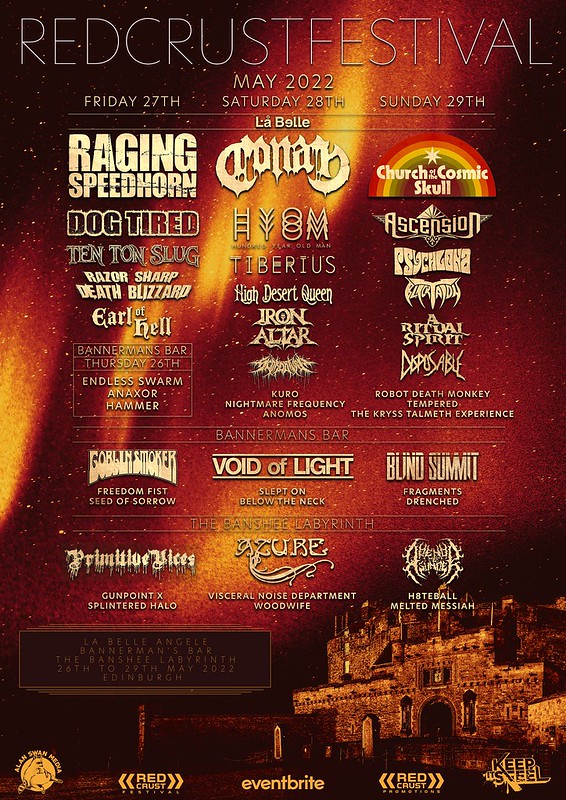