Originally released in 2021, ‘Plague Eater’ is a re-release of the debut release from Germany’s Nekkromaniac, who make no secret of their desire to worship at the altar of those that have tread before them; namely Bathory, Merciless and Sodom. Plundering every asset from the tombs of the old school underground, Nekkromaniac are another band that fall into the burgeoning blackened thrash metal that has seen the likes of Hellripper, Nightfighter and Midnight achieve prominence in recent years.

Sticking to the blueprint, Nekkromaniac have been in existence in some format for close to a decade, but it was only in 2021 when ‘Plague Eater’ was ready to be unleashed. The irony of this review is that I’m listening to a digital copy of a release that is planned purely for the vinyl market. It’s unlikely that the distinct crackle as the needle hits the record will be replicated here but there is enough contained within the 35 minutes and eight songs to form a view. It’s Bathory whose influence is most evident here, with tracks such as ‘Napalm Funeral’ summoning the power of those early records. The atmosphere is demonic, the playing furious and unreconstructed, and the vocals as hideous as one would demand. 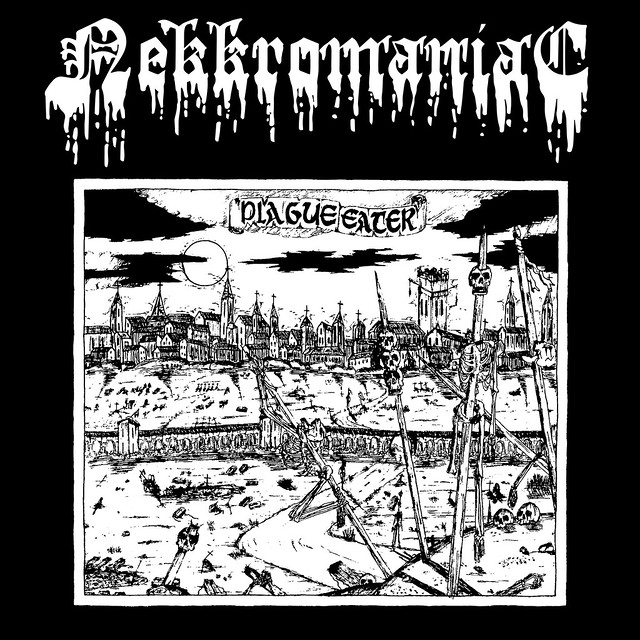 There are many other influences which surface as the album progresses. Draw in elements of Slayer and Metallica from the thrash side, whilst there is plenty of Venom style delivery on tracks such as ‘Black Death.’ Hurried, aggressive, Satanic in content and full of rage, Nekkromaniac switch tempo at will, moving from brute force speed thrash to more chugging formats as well as echoing black metal which brings a harrowing feel to songs. Underlying it all is a dedication to the underground sound. There is no polished product on offer here, merely a desire to deliver in the style of the old gods. The production is raw, the music wild and wide-eyed. It’s nothing we’ve not heard before, but it certainly cuts the right way. ‘Pit and the Pendulum,’ the frenetic pace of ‘Awaken the Depths’ alongside the ferverish opening title track all emerge visceral and bleeding. It’s just a matter of appreciation and one cannot but admire the devotion to a time when tape trading, late night parties and recordings were the norm.

With influences wide and varied, from Sabbat to Bathory, Slayer to Sodom, ‘Plague Eater’ is an album that will draw the attention of those seeking further old school delights. It’s certainly a record that will get continued plays with me.