Founded back in 1982, the Quebec quartet should need no introduction to the readers of these pages as their fortieth anniversary ticks around. Already in the bag for 2022 is the excellent Synchro Anarchy, album number fifteen (reviewed by Robbie in these very pages) which sees the band continuing their ever-ascending trajectory.

What better way to mark four decades than to go back to the (almost) beginning? This new set from Noise Records is available in both compact disc and vinyl formats and sees a couple of releases making their vinyl debuts.

Focussing on the three Eighties releases by the German label, Forgotten in Space is a bringing together of the triptych of albums beginning with 1986’s Rrrröööaaarrr, Killing Technology from a year later and ending with Dimension Hatröss from 1988. In anyone’s book, this represents a phenomenal achievement, not only in the work-rate to create and deliver in such a short period of time, but also in the evolution of the band’s sound and vision. Come 1989 and the band would release Nothingface on the Mechanic/ MCA label, cementing them as being one of the most important bands of their generation. Sadly, Nothingface does not feature in this collection.

Disc 1 of this collection is Rrrröööaaarrr from 1986. Coming two years after their War and Pain debut, Rrrröööaaarrr arrived with the thrashing rage of its predecessor on tracks like To the Death, Ripping Headaches and the elegantly titled Fuck Off and Die. Yet, the sophomore effort, for all its bluster, does begin to demonstrate some of those tendencies for which the band would become renowned.

Slaughter in a Grave hints at the progressive elements that would define Voivod’s future output; whereas they incorporate a Venom-like speed metal stance on Horror and The Helldriver. Korgüll the Exterminator opens proceedings with the industrial throb of ominous chords before messers Snake, Piggy, Blacky and Away set out creating a new mode of musical extremity, after which the Metal World would never be the same again.

1987’s Killing Technology forms Disc 2 of this set as the same personnel take another leap forward with their sound. Whatever Thrash elements remained after Rrrröööaaarrr have largely now disappeared in favour of a more progressive and relatively refined production. The band appeared to have moved away from the Metal-influences of the first two records, replaced by more Hardcore, Punk and Crossover acts.

The improvements in writing, performance and production are evident from the word go as the seven-minute title track kicks off the album; an amalgam of the thrashing and the progressive, Killing Technology almost heralds the start of the new version of Voivod, one which embraces the avant-garde alongside the abrasive, to concoct a hybrid that would become their template.

The thrashing rage is less prevalent across Killing Technology but that doesn’t mean it is any less aggressive. There’s a grooving mid-section in Overreaction and a Celtic Frost Gothicism to Too Scared to Scream; pulsating riffs with a sharp, staccato delivery dominate This is Not an Exercise and Away’s skipping drumbeats define Cockroaches. 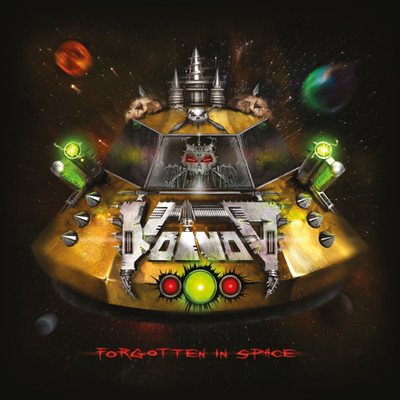 A departure from the previous albums is the subject matter of the band’s material. Now, Voivod seemed preoccupied with the cosmic and that can be heard on Forgotten in Space‘s widescreen presentation or the Lovecraftian scope of the Sabbath-inspired Ravenous Medicine.

Another year and another Voivod record, this time Dimension Hatröss in 1988 – Disc 3 of this set – which sees the band taking another leap forward in the song writing and creativity steaks. Rolling Stone magazine placed Dimension Hatröss at number 78 on their 2017 list of Top 100 Metal Albums of All Time, and with good reason. For all Killing Technology’s dalliance with the Cosmic and the Progressive, so Dimension Hatröss sees those ideas again expanded upon and given even more room to breathe.

For this forth album, Voivod have gone the way of all self-respecting progressive outfits and created a concept album based around the exploits of their mascot, Korgüll the Exterminator. Chaosmongers and Technocratic Manipulators head out into the forward-thinking, progressive waters, utilising odd-time signatures. Opener, Experiment, seems to foreshadow the album’s step-up in creativity while Macrosolutions to Megaproblems has a metallic gallop but keeps the thrashing to a minimum.

Elsewhere, Brain Scan, Psychic Vacuum and Cosmic Drama maintain the momentum, reenforcing Piggy’s wunder-riffing and Snake’s drawling vocal delivery. The impossible to ignore Tribal Convictions still sounds as good today as it did back in ’88 and means Dimension Hatröss just beats out Killing Technology as being the most consistent disc of this collection. The only fly in the ointment as far as I’m concerned is the Batman theme cover which, good for a one-off chuckle, quickly outstays its welcome and becomes proof that Voivod are human after all.

Available for the first time on vinyl - but featured on the 2017 Deluxe Expanded Editions of these three albums - are Discs 4 and 5: Dimension Hatröss – The Demos and the live set that is No Speed Limit Weekend ’86 respectively.

Like all Demo recordings the appreciation is in the ear of the beholder. It is always interesting to hear your favourite bands going through the creative process and getting an idea of what decisions are made to bring a set of songs wholly to become a finished article.

The No Speed Limit Weekend recording is as unpolished as you would expect from its age. But what it lacks in refinement it more than makes up for in sheer visceral energy. Taking tracks from the first three records, it’s great to hear old thrashers like War and Pain and Warriors of Ice played alongside the more couth Tornado and Overreaction. And the basic recording is filled with the sweaty-club vibes that defined both the genre and the era.

A sixth disc, Chaosmongers, is a DVD containing a mini documentary plus a previously unseen concert from 1987 and an audio recording of the legendary WWIII show from 1985 and the package comes with a forty-page book and USB drive with MP3s of all the albums on.

Unfortunately, I didn’t get to see the DVD or the booklet, but that seems inconsequential as the quality of the five disc I did get to hear was more than enough to make a hearty recommendation that Forgotten in Space deserve a place on the shelves of every self-respecting fan of heavy and complex music.